ROCKVILLE, Md. (DTN) -- 2021 is shaping up to be a year of pestilence. Even setting COVID-19 aside, farmers have seen an active year of insects, disease and herbicide-resistant weeds, on top of the usual seasonal challenges of farming.

In this month's installment of Field Roundup, DTN Farm Advisers -- a group of farmers and ranchers from around the country -- reported via email on the season's most challenging pests. In central Kansas, Kyle Krier is wearily watching armyworms demolish his drought-stressed alfalfa. Northeastern Colorado farmer Marc Arnusch is running out of ways to kill kochia, while farmers reported stubborn waterhemp infestations in Illinois, Ohio and Minnesota. White mold is troubling north-central farmers, while the Andersen family in eastern Nebraska is uncovering more sudden death syndrome (SDS) with each soybean scouting trip.

All these pests will add to farmers' to-do lists come seed and chemical shopping season.

"We will have to get through it this year, then figure out where to go from there," said Nebraska's Ashley Andersen.

In the meantime, rainfall remains top of mind, from growers receiving far too much in the Delta and spots across the central Midwest, with others hoping for a final inch or three to finish off their corn and soybean crops.

RAIN MAKES GRAIN ... UNTIL IT DOESN'T

Alberta, Canada, farmer John Kowalchuk is not one to complain about rains, especially after a droughty year in the Canadian Prairies. But, well, the timing could have been better.

"We have been dry most of the summer, but over the last couple weeks, the rains have started right when harvest did," Kowalchuk said. Rainfall arrived in the dry plains of central Kansas last week in a more helpful fashion, in time to boost parched soybeans and give Krier's hardy milo crop a solid final push.

Mark Nowak, in southern Minnesota, also had good rain news, after battling entrenched drought all summer. His fields saw 3.3 inches of rain -- nearly half what his region has received since April 1. "But that still leaves us only 48% of normal for the growing season," he noted. Nonetheless, it will help fill top soybean pods, add to corn's test weight and refill the depleted soils.

Farmers are hoping to catch a lucky shower or two elsewhere, such as southeast Michigan, which has seen little rain since July, as well as Ohio and Missouri, which are drying out just as high-yielding crops try to cross the finish line.

Farmers in Maryland, Indiana and Texas reported adequate moisture levels, with one farmer in central Illinois begging for a break. "We had our fourth 7-inch-plus rain this year," said Reid Thompson. "In general, we are in good shape with moisture, but are starting to see signs of excess rains, both in nitrogen running out and some stalk deterioration," he said. A storm system that tore through Iowa and Illinois on Aug. 27 also brought more rain and wind than many needed, resulting in some lodged cornfields.

Finally, Hurricane Ida, recently downgraded to a tropical storm, is actively pounding the Gulf Coast, with a forecast route pushing up into the Delta and Southeast, threatening the region's cotton and soybean crops, which were poised to make excellent yields this year. See more from DTN here: https://www.dtnpf.com/….

"Rain makes grain, and rain makes lots of weeds!" noted Mike Lass, who farms and ranches in the Texas Panhandle, adding, "I'll take weeds over a drought any day!"

And weeds there were. Central Ohio farmer Keith Peters is alarmed enough by the stubborn waterhemp surfacing in his fields that he has sent some off to Ohio State for testing, to see exactly which herbicides it has defeated. So far, a second pass of Liberty has cleaned most of it up, but the situation has him considering a switch in herbicide-tolerant seed platforms.

Waterhemp was a common complaint among Minnesota and Missouri farmers as well. Weather played a role, noted Nowak. Searing June heat may have reduced the effectiveness of post-herbicide applications in his region, as weeds shut down to survive.

And in Colorado, Arnusch is at his wit's end with that tricky tumbleweed, kochia. "We simply cannot kill kochia any more with glyphosate unless they are less than the size of a golf ball," he noted. "We are also starting to see glyphosate-tolerant lambsquarter and even herbicide-tolerant red-root pigweed." Rotating chemistries has helped, but they have been forced to re-incorporate some tillage, as well, very reluctantly, he said.

In the meantime, armyworms are on the march across the country, terrorizing a wide array of crops, from rice and soybeans in the South to pastures in Michigan and Krier's alfalfa and sorghum in Kansas. "They have shown up in a brief period of time, forcing us to make the difficult decision of trying to save a failing crop or let go to the marching army of worms," he said. (See more from DTN here: https://www.dtnpf.com/… and here: https://www.dtnpf.com/….)

Illinois' Thompson is seeing tar spot in his cornfields for the first time this year, complicating future crop management. And SDS has been surfacing in many fields, including the Andersen's and their neighbors in eastern Nebraska. White mold is also proving troublesome in soybeans in the upper Midwest, said Raymond Simpkins, who farms in southeast Michigan. (See more from DTN on why there can be an increase in soybean disease susceptibility when new herbicide-tolerant traits join the market here: https://www.dtnpf.com/…).

YIELDS RANGE ACROSS THE BOARD

The best crop reports came from Nebraska, Indiana, Illinois, Missouri and Texas. "Corn seems to be the talk of the county," Andersen reported, although soybeans are trending more average. "It should be a fun harvest." Likewise, southwest Indiana farmer Scott Wallis is hoping he doesn't jinx himself when he estimates his crops are poised to set farm records by 10 bushels per acre (bpa) on corn and 5 bpa on soybeans. Illinois' Thompson is also confident his region will pull in above-average yields, and the same might happen in north-central Missouri -- as long as soybeans get some final rains to fill out, farmer Kyle Samp predicted.

In Texas, irrigation has switched on to finish out crops, while cotton is still packing on blooms. Although a lot can happen between now and harvest in two months, "It's been a great growing season for cotton; if we have a long, warm fall, this is liable to be the biggest cotton harvest ever," Lass reported.

Reports of more average crops came from Maryland, Ohio and Colorado, with rain being the primary limiting factor. "I think, overall, I'll have decent corn and bean yields, but I've lost quite a bit off the top," as Ohio's Peters put it. In northeast Colorado, the aggressive wildfire season played a role, as well, with smoky skies filtering out the sun until the past couple weeks, Arnusch said: "Even though the growing degree unit (GDU) accumulation was on track, our crops' development wasn't."

In the driest areas, namely the Canadian Prairies and the Northern Plains down to Kansas, yields are likely to clock in below average. Krier believes soybean yields in the central part of Kansas have dropped from 50-plus-bpa potential down to 20 to 30 bpa. "Even breaking the $14 soybean pricing point won't save us at this point," he lamented. In Alberta, Canada, Kowalchuk's malt barley, yellow peas and wheat harvests all clocked in below average, and his canola stands look mighty thin as they head into their final week or two.

Even in places that looked good earlier, such as Michigan, August's turn toward hot and dry is taking a toll. "Corn and soybeans are both struggling right now with heat and dryness," Simpkins reported. "Beans in pods are small, and some pods are even flat with no beans in them, and there is a lot of pod drop." He estimates this month has peeled off 20- to 30-bpa of yield potential from bean fields.

See what DTN's Farm Advisers were dealing with last year at this time here: https://www.dtnpf.com/…. 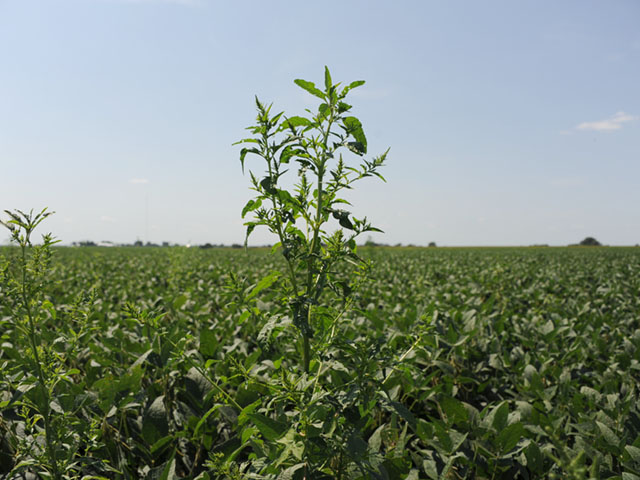