ROCKVILLE, Md. (DTN) -- To see why the year 2020 may go down in history as the year of broken promises, look no further than Mother Nature.

After a sprightly planting pace and good early season moisture built up big yield potential throughout the U.S., heat and dryness has fried the hopes of record crops for many farmers in the western and north-central U.S.

"My corn crop is indicative of what 2020 has become -- it started off great, it was hit with some uncertainty and adversity, it began to look better, then the impossible crept up on us," said northeastern Colorado farmer Marc Arnusch. "Now I'm just over it."

Arnusch is part of the DTN Agronomy Advisers, who report on field and crop conditions each month. This month, this group of producers told a tale of two crops. Many Midwest and southern growers expect average to above-average crops, thanks to the normal planting season and timely rains throughout the summer.

But another sizeable percentage in the Plains and north-central Midwest have watched August heat tip back corn ears and leave soybean pods flat and small.

"We have seen flash drought develop over many crop areas during mid- to late-summer" said DTN's Senior Ag Meteorologist Bryce Anderson. A flash drought is defined as an area dropping two categories or more on the U.S. Drought Monitor within a month. West-central Iowa has seen some of the most acute conditions, which were compounded by damage from an early August derecho, Anderson noted.

"In August we've seen west-central Iowa degrade further, to Extreme Drought (D3) for the first time since 2012 while almost the entire rest of the state has gone into various drought stages from abnormally dry to severe drought," he said. "This situation is a definition flash drought and has moved crops into early drying from which they will likely not re-start."

WHERE PROMISES HAVE HELD SO FAR

Big crops are looming in many fields in well-watered states such as Maryland, Missouri, Minnesota, Nebraska, Idaho, Arkansas and Illinois, farmers told DTN.

Even though rainfall amounts were often below average month-to-month, the rain that did fall on southern Minnesota farmer Mark Nowak's farm had "perfect timing," he noted. "It should be one of our top five crops over the last 30 years," he estimated.

On the Eastern Shore of Maryland, Jennie Schmidt is praying the spigot in the sky stays shut for a change. Her farm received 16 inches of rainfall recently, after Hurricane Isaias swept through the region, followed by a rash of storms. The deluges spelled doom for 75% of her tomatoes and 30% of her green bean crop, but it's been a boon for grain crops.

"Corn-wise, we are expecting an excellent crop," she predicted. "Soybeans look good as well but have gotten so tall and, with the storms we've had, are starting to lodge."

The drier conditions this August have irrigation pumps working overtime in Arkansas, in contrast, said Charles Williams and Reed Storey, who both farm in east-central Arkansas. Both are expecting decent yields from their grain and cotton crops and are praying that Hurricane Laura, currently spinning through the Mid-South, leaves only rain in her wake.

"I would much rather have dry weather in August than hurricanes," said Storey. "I'm praying we don't see much damage from Laura."

A little tropical moisture would be a boon to Kyle Samp, who is sitting on above-average corn and soybean crops in north-central Missouri -- for now.

"If we go two weeks with no rain, this crop will become very average very quick," he estimated.

WHERE PROMISES ARE SLIPPING AWAY

From Texas, up through Kansas and Colorado and across Iowa into Ohio, the month of August was a troublemaker, from the development of flash droughts to a devastating derecho that flattened crop fields.

In the Panhandle of Texas, only irrigated crops have survived the region's dry conditions, said farmer and rancher Mike Lass. "Sprinkler and drip-irrigated farmers will run a couple more weeks unless we have a rain event," he estimated. "But because of zero dryland cotton and extended drought and heat, I will speculate 50% less cotton in total bales on the Llano than normal."

Elsewhere, promising crops have begun wilting under the hot August sun. The effect is particularly discouraging in the Southern Plains, where unusually good moisture early on set farmers up for a banner year.

"We are limping through August with our tongue hanging out and with a lot of sweat rolling down our forehead," said Colorado's Arnusch. "It's been very hot, and our farm hasn't seen a raindrop since July 6. We are days away from chopping our corn for silage and our yields will be smaller than expected, just like the wheat harvest was back in July."

In central Kansas, Kyle Krier is also watching a lot of yield circling the drain, after soil moisture reserves evaporated this month. "Our August finished about as well as forgetting something cooking on the stove top," he lamented. "Beans look as white as a ghost. Other crops quickly following. What we once thought was going to be an incredible bean crop has likely dropped 40-50% in potential."

In the north-central states, crops look better, particularly soybeans. But farmers reported great variability in corn, which is showing the effects of wet planting, flash droughts and scorching heat during pollination.

"Soybeans are looking very good. But corn is a different story," said southeast Michigan farmer Raymond Simpkins. "Cornfields have lots of holes from getting drowned out right after planting. High heat at pollination has caused ear tip back. Some varieties worse than others, but all of it has some."

That assessment was echoed by Ohio farmers, who say they have eked by with scarce rainfall in the latter half of the summer. "After a wet spring delayed planting, we haven't been able to buy a rain," said Genny Haun, who farms in the west central part of the state. "We have caught showers JUST when we needed them."

The effect has been crops that might look OK from the road, but with problems lurking deeper inside the field, added central Ohio farmer Keith Peters. "We have been short on rain, getting just enough to green the corn back up each time it rains," he explained. "But I think the extreme heat that hit the corn while it was pollinating, or while it was determining ear size, is the main culprit." He's finding a wide range of corn yield and quality in his fields.

HARVEST CONCERNS ARE TOP OF MIND

Weather always looms large in the mind of farmers when it comes to harvest concerns. This year will be no different, Ohio's Haun said.

"It's always a race against the weather clock," she noted. "What little corn we did harvest last year, I know we did one farm with about 4 inches of snow on the ground!" Idaho's Lakey concurred. "Last year, the weather turned on us in the middle of September and we ended up with several thousand acres of crops under snow!" he said. "Hoping that doesn't repeat this year."

"My biggest concern currently is weather," said Arkansas's Storey, whose region is getting pummeled by Hurricane Laura. "We've had terrible falls the last two to three years as far as harvest weather. I hope and pray this is the last rain we have until harvest is over." Maryland's Schmidt is also hoping hurricane season in the Atlantic is over.

For growers who have had storm damage and droughty weather, quality concerns are also surfacing. Insects, disease, hail and poor pollination conditions may set up crops for molds, stalk rots and lodging.

"Everything worries me about this fall," Ohio's Peter said. "When I was pulling ears for a yield check, two broke in half. The cobs were rotten, insect damage, I believe."

Logistics will also be a struggle, particularly with some grain bins leveled during the derecho and last year's grain still sitting in others. With big crops coming in some regions, storage could get tight, warned Nowak.

"Some elevators are near full from previous harvest inventory," he noted. "There could be some spot issues with elevators that don't want to pile outdoors, and they may turn away any grain coming at them that is not contracted. That will be a serious problem for some of those farms."

And of course, the pandemic that is still claiming roughly a thousand lives a day in the U.S. remains an ongoing threat to every operation. "If COVID 19 were to hit our farm, it could cripple our harvest," said Ohio's Peters. 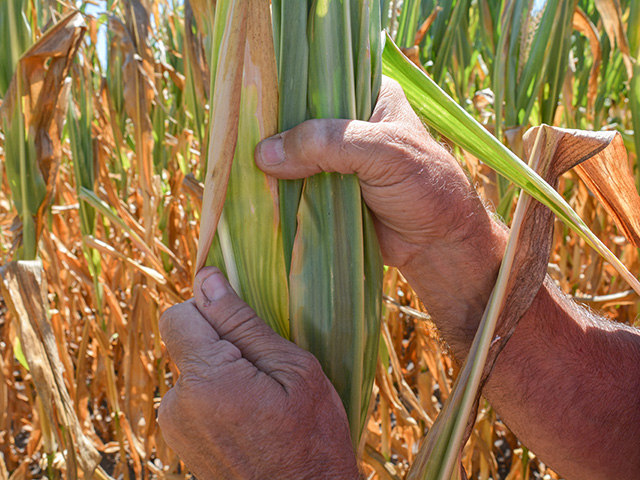