ROCKVILLE, Md. (DTN) -- Few souls would ever willingly spend their birthday sorting through wilted soybean leaves and splitting sickly stems, but it's a good thing Daren Mueller is one of them.

That's how the Iowa State University plant pathologist discovered that, yes, many of those wilting yellow soybean patches surfacing across Iowa this month are from the dreaded Sudden Death Syndrome (SDS), despite the state's drier-than-average season.

Mueller's weekend scouting trip confirmed some of the things he and his academic colleagues have learned about the disease in the past decade: The fungus that causes the disease is present all season long, often causing less visible yield damage in drier years. Two commercially available seed treatments can help reduce the disease's symptoms and yield loss but won't eliminate it. And native varietal resistance remains your best tool -- but that can slip sometimes when new soybean traits are launched.

"Every time a new trait comes to market, such as herbicide-tolerant traits, breeders start by putting them in the highest yielding, best standing varieties, rather than focusing on individual disease resistance," Mueller noted.

So, scout soybean fields carefully this year ahead of 2022 seed selection, keeping in mind there are look-alike culprits, such as brown stem rot, southern stem canker and fungicide injury, which may be at play too.

SDS is well known for its alarming, late-season symptoms, when the fungus, Fusarium virguliforme, flushes toxins up into the plant, generally starting around the R2 growth stage and beyond. The onset of symptoms often follows large rain events, when the plant gets a spurt of growth that helps the toxin race up to the leaves and accumulate. Leaves turn an eye-catching yellow in between veins, known as interveinal chlorosis. In severe cases, entire plants turn necrotic and die.

But the advent of two effective seed treatments, Syngenta's Saltro and BASF's ILEVO, have taught researchers that the disease is robbing soybeans of yield well before it becomes visible from the road.

The fungus initially infects soybeans around planting and emergence, with help from wet soil conditions. While plants can develop normally in the months to come, that root rot alone is taking a toll.

"Obviously the foliar symptoms are the most apparent and probably drive yield loss," Mueller explained. "But we have definitely had yield responses in seed treatment trials that show a reduction in root rot, but no reduction in foliar symptoms. So we're gaining more evidence that the root rot phase can affect yield."

That can also explain why Iowa farmers are seeing patches of SDS in their fields, despite many experiencing a drier-than-average season. The fungus is still present in the roots, doing damage, even if it hasn't had the ideal conditions to produce enough toxins for the foliar symptoms, Mueller said.

"Some of the patches I'm going into are just sitting in the root rot phase of SDS; it's been so dry, we've had no toxin production, but these patches of plants are stunted and starting to yellow," he said. The more access to moisture a section of a field has, the more likely you are to see the classic foliar symptoms of SDS, he added.

SDS-SUSCEPTIBLE BEANS MAY BE MORE COMMON

Some fields with newly available herbicide-tolerant traits might simply be more susceptible to the disease, as well, Mueller said.

Getting new traits into a broad range of varieties, with all the localized disease and insect tolerances you might want, takes time. In a Crop Protection Network paper published in 2019 by eight university crop scientists, the researchers noted that renewed susceptibility to diseases like SDS tend to follow new trait launches, such as the initial Roundup Ready beans.

Some of the fields showing SDS symptoms might be treated with Saltro or ILEVO, but don't take that as evidence that the seed treatments aren't working -- especially if you've planted a susceptible variety, Mueller said.

"Unless you've left check strips untreated, you have no idea how much worse the infection could have been without the treatments," he explained. Past trials from soybean checkoff-funded product evaluations across the Midwest have shown that treated susceptible fields can outyield untreated susceptible fields by 6 to 8 bushels per acre, even when foliar symptoms look similar, most likely due to less root rot, he said.

And keep in mind that academic research suggests the seed treatments can reduce foliar symptoms by 30% to 35% -- not 100%. "They're not meant to be a magic bullet," Mueller added.

Soybean fields with soybean cyst nematode infestations can also cause more severe responses to SDS, Mueller noted. Past soybean checkoff research has found that soybean varieties with functioning Peking or PI 88788 resistance to SCN reduced the symptoms of SDS. "But if that SCN resistance starts to break down, you can see more SDS," he added.

While brown stem rot shares many of the foliar symptoms of SDS, a key diagnostic difference lies in the color of the pith -- the center part of a soybean stem. In BSR, it will be rotted and brown.

"SDS can have browning too, but it's in the vascular tissue, the outside part of the root, not the inner pith," Mueller said. "And it's not as obvious as the browning in brown stem rot." See more from Iowa State here: https://crops.extension.iastate.edu/….

Keep in mind brown stem rot control can be at odds with SCN management sometimes, since varieties with certain types of SCN resistance tend to be susceptible to brown stem rot, according to the Crop Protection Network. See more here: https://cropprotectionnetwork.org/….

Likewise, southern stem canker can mimic the foliar symptoms of SDS, but look for lesions on the stem, said University of Kentucky plant pathologist Carl Bradley. "Management of southern stem canker differs from management of SDS, so it is important to distinguish between these two diseases," he warned growers in a university newsletter on Aug. 17.

You can find videos about distinguishing stem canker and SDS from the University of Kentucky here: https://kats.ca.uky.edu/…. See Bradley's newsletter here: https://kentuckypestnews.wordpress.com/….

Finally, fungicide phytotoxicity can sometimes cause foliar symptoms in soybeans similar to SDS. If you have sprayed soybeans in midday heat with fungicides, particularly those containing triazoles, that may be the cause of the interveinal chlorosis or dead leaf tissue you're seeing. See more from Mississippi State University plant pathologist Tom Allen here: https://www.mississippi-crops.com/…. 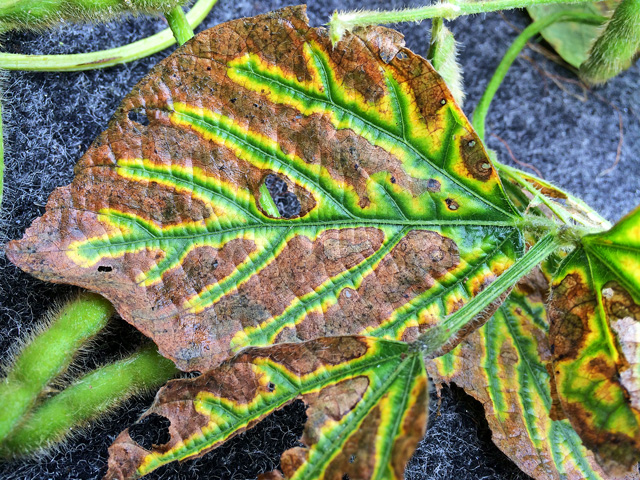