DECATUR, Ill. (DTN) -- Warnings about fall armyworm are coming from a host of state entomologists this year. Not only do the voracious pests come with crop damage concerns, but they are in some cases resisting control tactics.

"This is the biggest outbreak of fall armyworm situation that I've ever seen in my career," University of Arkansas entomologist Gus Lorenz said in a news release. "They're in pastures, rice, soybeans, grain sorghum. It's epic."

University of Tennessee entomologist Scott Stewart issued a release stating that what's different this year is the fall armyworm (FAW) flight is several weeks early in his state and larval infestations have been unusually high. He also noted that control with pyrethroid insecticides have been unusually poor https://news.utcrops.com/….

Outbreaks in Arkansas and Mississippi rice fields were severe enough that the Environmental Protection Agency (EPA) granted a Section 18 crisis exemption in late July enabling growers to use Intrepid 2F (methoxyfeonzide) in rice. Intrepid 2F is a growth regulator that's approved for use in many other row crops but is not labeled for use in rice. Find the label for this Group 18 insecticide from Corteva here https://s3-us-west-1.amazonaws.com/….

You can tell fall armyworm from the true armyworm by their characteristic dark stripes and a light-colored marking that looks like an inverted Y on their heads. Here's more on the differences: https://www.uaex.edu/….

Armyworms get their name from their behavior of moving across fields in an army-like fashion. As they consume available food sources, they migrate together to new host plants.

Alabama Extension entomologist Katelyn Kesheimer noted in a release that long periods of persistent rains are creating a thriving environment for armyworms in that state. In some cases, those rains have also prevented farmers from getting into fields to control infestations.

In a news release, she quotes fellow pest educators as saying it is the worst outbreak Alabama has seen since the 1970s. Kesheimer gives tips for managing the pests here: https://www.aces.edu/….

She recommended scouting during the cooler parts of the day when the caterpillars will be actively feeding. However, producers can look for armyworms down near the soil surface during the hotter parts of the day. When scouting, note both the size and number of fall armyworms to provide clues about control strategies.

"Ideally, you want to find them when they are smaller than 1/2-inch long. The smaller they are, the much easier they are to control," Kesheimer said.

University of Illinois entomologist Nick Seiter told DTN that fall armyworm tends to arrive late in the season (August/September) in his state. "But the fact that colleagues to the south are seeing them earlier than normal suggests populations could arrive early in Illinois as well," Seiter said.

"Most of the damage we see is in pastures. They can damage early-planted (winter) wheat and other small grains/cover crops," he added.

"If populations are heavy early enough, they will feed on soybean foliage as well, and they are an ear feeding pest in corn," he said. Seiter added they are notoriously difficult to control in the ear in corn.

Seiter noted that there are generally two strains of fall armyworms -- the corn strain and the grass (rice) strain. The corn strain feeds most commonly on corn, sorghum, and cotton. The grass or rice strain prefers rice, alfalfa, grasses in pastures, millet and vegetables. However, these armyworm strains are indistinguishable based on appearance.

University of Kentucky entomologist Ric Bessin issued a release last week reporting increased armyworm captures and stressing the need to scout pastures and late-planted corn in that state, as well.

"In pastures, pay particular attention to areas where the grass may seem to thin out or turn brown. FAW damage often resembles drought stress," he wrote. "Corn is attractive to FAW egg laying while in the vegetative stages. As corn begins to tassel it loses its attractiveness for egg laying. So, fields in western Kentucky that were late planted are more likely to have FAW." Read more here: https://kentuckypestnews.wordpress.com/….

Many corn hybrids contain genetic traits designed to control fall armyworm, but the insect has shown ability to resist Bt proteins. Use the Bt Trait Table to determine how your corn trait package stacks up with regard to fall armyworm control and confirmed levels of resistance: https://agrilife.org/….

When it comes to chemical control, the right product depends on where it is to be used, wrote Kesheimer. Residual control and rainfastness vary, depending on product. The pandemic market is also making some products more difficult to obtain.

Whichever chemical a farmer chooses, Kesheimer recommended making applications late in the day, rather than in the morning. This will allow the armyworms to ingest the chemical while they eat overnight.

For more information on outbreaks in Texas go to https://today.tamu.edu/….

For information in Indiana: https://extension.entm.purdue.edu/…

For more information from Illinois: http://extension.cropsciences.illinois.edu/… 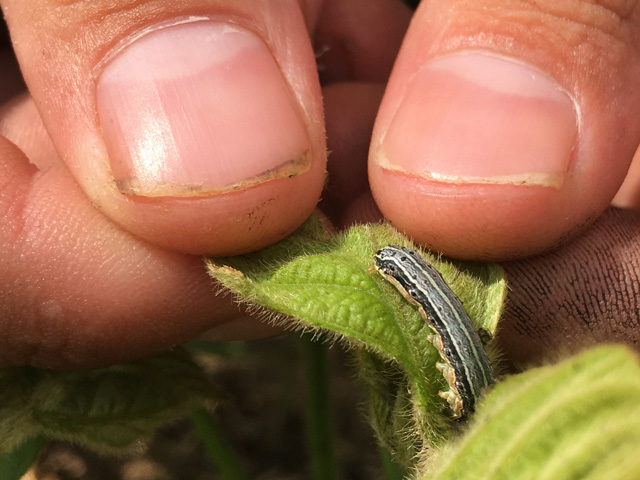