Do you remember the world before GM (genetically modified) crops?

If you're like the Rendel family, of northeast Oklahoma, each generation will answer differently. Brent Rendel started farming in the early 1990s. He easily remembers how magical Roundup Ready crops seemed and the awe of seeing weed control shift from requiring three passes across a field with chemicals and tillage, endless scouting and multiple employees, down to as little as a single application once a year by one employee.

"It made things so much easier," he recalled. "And, as with any new technology, if it gives you an 'easy button' for farming, farmers will push that baby hard!"

Brent's nephew, Zack, who joined the family in farming in the early 2000s and branched out to his own farm in 2018, has grown up in a world where that easy button is long defunct.

"Zack has never farmed when glyphosate was completely effective," Brent explained. In fact, the younger Rendel oversaw a suite of herbicide-tolerant traits on his farm last year, including 2,4-D-tolerant, dicamba-tolerant and glyphosate-tolerant technologies, as well as conventional soybeans.

Is he any better off now than past generations? It's a hard question to answer.

For a few weeks, DTN/Progressive Farmer is exploring the past and future of genetic engineering breakthroughs in agriculture. In this, the sixth story of our special series called Gene Revolution Turns 25, we explore how GM crops changed the agricultural landscape -- for better or worse.

A LOT HAS CHANGED

Since the first Roundup Ready seeds and Bt cotton plants in 1996, a lot has changed. (See https://www2.dtn.com/….)

Biotech crops ushered in major farm-management changes, from smaller workforces to expanded acreage possibilities. The nation saw a shift away from conventional tillage toward more no-till or minimum-till farming, as well as the growth of the cover-crop industry. The spectrum and amount of pesticides on the landscape changed, first as biotech crops killed insects and weeds with ease, and then again as the rise of insect and weed resistance chipped away at the technology's success and endangered its future.

Finally, as we enter a new decade, with new biotech tools such as gene editing on the cusp of transforming agriculture once again, the industry is faced with a growing number of consumers who are pushing back against technologies they don't trust.

"It was pretty grim right then," Lorenz said. "Growers were spraying anywhere from nine to 12 times a season and spending $150 to $200 an acre to control worms and boll weevils." He watched with trepidation as egg masses filled the leaves, and larvae emerged on the new Bt cotton variety, called Bollgard.

"But, you'd go back a week later, and there wasn't a worm in sight -- they were all dead," Lorenz recalled. "We couldn't believe it. We were so excited."

Bt traits were soon inserted into corn plants, as well. Like cotton, they steadily expanded to dominate the market; today, 88% of cotton and 82% of corn acres are Bt-traited.

For some of these pests, Bt has remained a remarkable control measure. To this day, young farmers and scientists Lorenz works with have no idea what tobacco budworms look like. Farther north, Bt traits have been so successful against European corn borer that a generation of farmers don't know how to scout for it, and non-Bt corn growers have benefited from landscape suppression of the pest.

Insecticide use for these pests naturally plummeted. An annual study from two economists, Peter Barfoot and Graham Brookes, estimated that Bt cotton and corn technology reduced insecticide use for its target pests between 1996 and 2018 by 52% in the U.S. because of widespread adoption by the country's farmers.

In the meantime, Roundup Ready crop adoption was also rising, especially in soybeans and cotton. Today, 94% of soybeans, 95% of cotton and 89% of corn acres contain herbicide-tolerant traits. University of Georgia weed scientist Stanley Culpepper remembers how his father, Luther, went from crossing a field up to 10 times a year and plowing regularly to embracing minimum-till agriculture immediately after his first Roundup crops in 1999. "He has been 100% strip-till with cover crops since," Culpepper said.

By 2017, USDA estimated that more than a fifth of U.S. cropland was in no-till practices. The fuel and soil-erosion savings from farms pivoting away from tillage toward no-till agriculture has been a boon to the environment.

It caused rapid changes in farm management, too, the Rendels recall. At one time, Brent was annually employing multiple employees to prescout soybean fields, spot-spray them multiple times, cultivate everything the sprayer missed and then hand-spray weed escapes in small vehicles dubbed "bean buggies."

"It capped our acreage," Brent recalled. "Manpower was the limit."

During the Roundup Ready era, the farm's employee roster shrank, and acres swelled. "We became more efficient," Brent said. "A little bigger and a lot leaner."

While it's true glyphosate use rose rapidly across the country, it replaced older active ingredients, many of them with higher toxicity profiles, noted Andrew Kniss, a University of Wyoming weed scientist who conducted an analysis of long-term trends in herbicide use in six major crops. The drop has been most stark in soybeans, where chronic and acute herbicide toxicity decreased 78 and 68%, respectively, from 1990 to 2015.

Now, the next generation of genetic engineering promises to move more consumer- and environment-friendly crops to the forefront. USDA recently decided that gene-editing technologies, which allow scientists to snip out and substitute parts of DNA faster than ever, won't be regulated like their older biotech predecessors. That means smaller companies and institutions are starting to bring gene-edited crops to market faster than ever.

Mushrooms that don't brown, drought-resistant corn and high-fiber white wheat flour are just a few of the products racing toward the farmer and consumer in the next decade.

While yields have increased steadily in corn and soybeans over the decades, experts are still debating how much GM traits alone have contributed to that rise. For the Rendels, the greatest yield jumps on their farm have come in sorghum fields, where no GM traits exist, Brent said.

And, when the Rendels look at their current weed control and seed costs, it can be hard to see how GM crops benefited them in the long run. "I'm not sure it's made things more profitable," Brent said. "My net income hasn't changed on a relative scale. I've moved dollars out of labor and parts and moved it over to seed and herbicides." (See a chart comparing the Rendels' soybean input costs between 1995 and today here: https://www.dtn.com/….)

"We noticed it was taking certain weeds longer to die, and that others were coming back quicker from applications," Zack recalled of his time on the farm between 2003 and 2005. "We didn't realize what it was we were seeing, and we were told to just keep upping the rates of glyphosate -- just pouring more on, when we should have been switching chemicals."

By 2006, Culpepper had confirmed the country's first glyphosate-resistant Palmer amaranth plant, a biological superspreader of a species. "We've had herbicide resistance in agriculture for longer than I've been here, but most of the resistance we saw before this didn't change the world of agriculture," he said.

The International Survey of Herbicide-Resistant Weeds now estimates that 165 weed species are herbicide-resistant today in the U.S. alone. At least one weed, waterhemp, is now capable of tolerating six different herbicide modes of action in certain populations.

Even the advent of traits with tolerance to older herbicides, such as dicamba resistance and 2,4-D resistance, hasn't slowed the march: After just four years of dicamba-tolerant crop acreage, Tennessee scientists confirmed dicamba-resistant Palmer amaranth in 2020, with 2,4-D resistance suspected, as well.

For many public scientists, tracking this resistance has become a full-time job. For many farmers, weed resistance has rolled back the clock on conservation tillage and increased herbicide use.

"Iron is coming back; there's no way around it," said Brent, whose operation has reincorporated conventional soybeans and tillage into its weed-management practices. "I will never have a new herbicide mode of action in my farming lifetime, nor will any other farmer in their mid-50s or above," he predicted.

In the meantime, seed costs continue to rise. The Rendels recently discovered they could grow a non-GM soybean line from the University of Arkansas that costs $30 to $40 less per unit, yields competitively with their herbicide-tolerant soybean varieties and sells for a premium.

Even in Bt crops, where the insecticide reductions remain a bonus, resistance and a changing pest spectrum have dulled the technology's initial shine, Lorenz noted.

In cotton, pests rushed to fill the vacuum as caterpillar control improved, he recalled. Tarnished plant bugs, thrips and stinkbugs now top cotton farmers' list of costly pests, and insecticide resistance is growing in many of these populations. Likewise, in corn, secondary corn pests that weren't as susceptible to Bt traits, such as the Western bean cutworm, have become more prominent and costly to control.

In the meantime, the worms are fighting back against Bt. Cotton bollworm/corn earworm has slowly fed its way through the parade of Bt proteins seed companies have brought to market. Southern entomologists are watching resistance pressure mount against the lone remaining efficacious protein in corn and cotton, Vip3A. Farther north, the Western corn rootworm has evolved resistance to four Bt proteins on the market that target it, and the next generation of traits have been slow to reach market.

As bad as current weed resistance is, greater dangers may lie ahead. Most recently, weed scientists at the University of Illinois have confirmed the existence of a troubling new type of resistance in weeds known as metabolic resistance.

Within society, an old threat to GM crops still looms: consumer sentiment. A recent survey conducted by farm and food trade groups found that while consumers have little concrete knowledge of GMOs, they also have "high awareness" and negative views of the technology. The same respondents had even less knowledge of new techniques such as gene editing but had instant negative associations with them. Anti-GM groups such as U.S. Right to Know and the Non-GMO Project, which have long targeted traditional biotech crops, have turned their sights on gene-edited products, labeling them as "GMO 2.0".

"If we could go back 30 years, could we have done it differently -- could we have come out with the first GMO crop that did something like cure poor eyesight?" Culpepper wondered. "If we had done that instead of pushing these traits that appeared to only help the farmer, maybe we'd be in a different situation."

Chemophobia -- a distrust and fear of chemicals -- is another challenge to GM crops that was at least partially borne of industry's past sins.

Widespread use of glyphosate has made the herbicide extremely easy to find in the environment and food system. Four years of off-target dicamba injury have fractured the agricultural industry and raised the public profile of chemical use in agriculture.

"It's clear that we're not always keeping products where they need to be," Culpepper said. "The only thing we can do, moving forward, is what we are already doing trying to do: make on-target applications."

In the meantime, the Rendels stand ready to do what farmers have done for decades: change with the times. "We'll grow whatever the market tells us to grow," Brent said. "If that's GMOs, great. But, if it's not, we can do that, too."

Editor's Note: This is the sixth of the stories in our special Gene Revolution Turns 25 series. Next in the series: how growers divide acres between transgenic and nontransgenic crops to capitalize on the best markets.

If you missed the first few stories in our series, you can see them at: 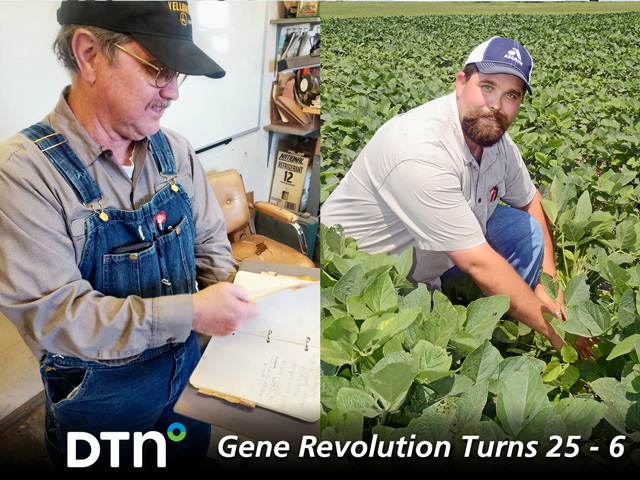