Playing the role of fortune-teller, Syngenta's head of global seeds research might foresee an exciting future for crop varieties and traits thanks to big advances in plant breeding.

"Looking into the future, transgenic technology will be accelerated by the new innovation that is happening in biotech areas, such as genome editing," Gusui Wu said. "We believe gene-editing technology will have a big impact in the years to come."

Advancements in gene editing and biotechnology are being driven by multiple seed companies in their efforts to improve agronomic attributes and yield, to name just a few.

In the next few weeks, DTN/Progressive Farmer is exploring the past and future of genetic engineering breakthroughs in agriculture. In this, the third story of our special series called Gene Revolution Turns 25, we look closer at the new tools that can hasten future seed and trait introductions and how they work.

ONLY SCRATCHED THE SURFACE

Jonathan Phillips, head of weed and pest-control research in plant biotechnology for Bayer Crop Science, thinks researchers have only scratched the surface of gene editing. He predicts the big change going forward is how new technology and traits are deployed.

"I think we will continue to see an evolution of molecular-based technologies that target genome modification in different ways. Improvements in the efficiency of moving large sequences of DNA to enable the improvement of alleles from one background to another will facilitate trait development," he said.

"Researchers will continue to look at efficiencies of different versions of CRISPR technology and base-editing technology to expand the utility of these technology platforms." (See more about CRISPR at https://www.dtn.com/…)

At Syngenta, Wu contends HI-Edit technology, which the company recently patented, is the next big thing in plant transformation and trait development. HI-Edit is short for haploid-induction editing. Wu said it could reduce the time to develop commercial hybrid varieties by 70%.

HI-Edit combines genome-editing technology such as CRISPR-Cas9 with the reproductive process of haploid induction (HI) that occurs naturally in hybrid crops such as wheat, corn and barley.

Breeders can modify crops at various stages during the seeds research and development process without the substantial cost and time associated with trait introgression, the traditional method of transferring desirable genes from one crop variety to another. That can take up to seven or more years to fully complete, according to the company.

Using corn as an example, here's how HI-Edit works:

-- The progeny will have the result of the editing but not the editing components. The CRISPR-Cas components will no longer be detectable in the offspring because they are left behind and destroyed in the haploid formation process.

Wu said HI-Edit technology can be used to bring gene-edited traits, such as disease resistance, drought tolerance and other agronomic traits, to corn or other hybrid crops ultimately improving yield gain. And, it can be done in one generation of breeding, he added.

"With HI-Edit, I just need to make one cross of my transformed gene-edited line with an elite inbred variety," Wu continued. "It accelerates the time to market for future traits. HI-Edit is a game changer."

In the future, he said, HI-Edit will likely help transform nonhybrid crops, as well.

"HI-Edit will allow us to put a trait in plants of elite (germplasm) genetic background to allow them to tolerate a new herbicide in rapid fashion," he explained. "We're also developing a new generation of herbicide tolerance and insect-control traits. In the future, we won't be deploying them the same way we are today because of HI-Edit."

Syngenta is working on multiple projects involving HI-Edit, such as maturity modification and plant architecture (plant shape and height, ear height, etc.) Wu can't predict when new products developed with HI-Edit will be ready for market because they're still in the pipeline, and the regulatory procedure process for gene-edited crops is a work in progress.

Regulatory approval for gene-edited crops using HI-Edit may be easier, because the method doesn't involve putting the CRISPR genes into the DNA of the resulting crop. That makes it indistinguishable genetically from the preexisting, naturally occurring variety.

Editor's Note: This is the third of the stories in our special Gene Revolution Turns 25 series. Next in the series: The gene gun helped ignite agriculture's biotechnology revolution. Learn more about how the tool was created and why the brilliant idea now is displayed in Smithsonian's National Museum of American History.

If you missed the first two stories in our series, you can see them at: 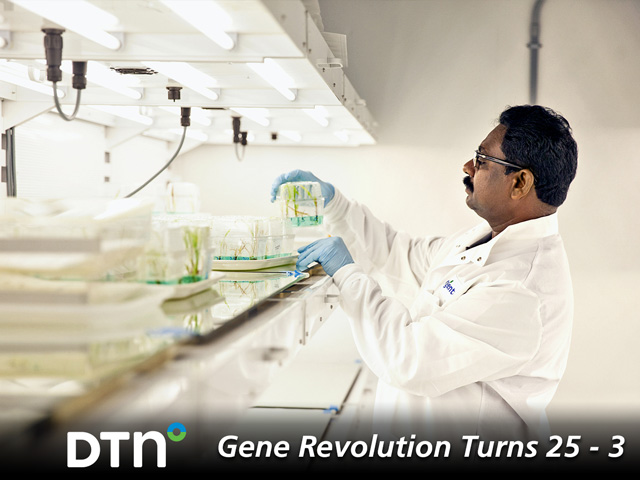