"I believed we were seeding hope for a hungry world. We were working toward ways to reduce dependence on chemicals," said Beachy, then a scientist at Washington University, in St. Louis, Missouri.

In the next few weeks, DTN/Progressive Farmer is exploring the past and future of genetic engineering breakthroughs in agriculture. In this, the first story of our special series called Gene Revolution Turns 25, we look closer at the different attitudes about the gene revolution.

"It was incredible -- the most amazing thing that happened in my farming life," Horan said. "Before, I spent the whole summer spraying, hoeing and trying to save my crop, and Roundup eliminated that. It allowed me time to be a better manager, a better husband and father.

"Time is the most precious thing any human has, and this technology gave me more of it," Horan recalled. The technology also allowed less tillage and more soil-saving practices.

Beachy, who serves on the National Science Board, calls the rejection of the science and increased regulatory requirements that resulted "arrogance of plenty." Cutting-edge tools that could have improved quality of life for many through vitamin-enhanced food, for example, are only now starting to be realized some 30 years later, he noted.

Gene-editing techniques now allow plant breeders to make specific and targeted improvements to a plant's genome blueprint and promise to provide more consumer benefits than the commercialized first-generation transgenic technologies. Will consumers be more willing to swallow low-gluten wheat that sidesteps sensitivities or sip coffee that has been saved from devastating disease?

"In gene editing, we're not adding new chapters to the book. We're just editing the words in the chapters that are already there," Blome explained.

Jennifer Kuzma, professor and co-director of the Genetic Engineering and Society Center at North Carolina State University (NCSU), said history has shown how important it is to instill public confidence and lift the veil on how plants or plant products are modified.

"Consumers want to know which products are genetically modified and which are not. I don't expect that to change for gene-edited crops," Kuzma said. "Crop developers, including companies, have signaled they want to do a better job with gene editing to improve public trust.

"If we simply say gene editing is a new breeding technique, and that we need it to revolutionize food and agriculture and that it provides benefits to the planet ... that's much the narrative formed in the early days of GMOs. We need to be informed by past communication mistakes to present a better future," she said.

Sustainability and climate change will be big drivers in altering attitudes, Blome believes. "We have to do a better job of explaining these benefits and the extensive review and selection steps gene-edited products go through prior to market launch," he said.

Editor's Note: This is the first of the stories in our special Gene Revolution Turns 25 series. Next in the series: a look at how CRISPR's genetic scissors slice through crop problems to improve varieties. 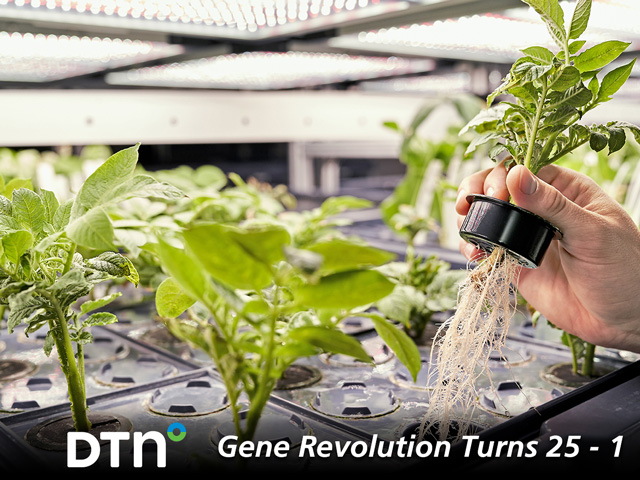