In the next few weeks, DTN/Progressive Farmer is exploring the past and future of genetic engineering breakthroughs in agriculture. In this, the second story of our special series called Gene Revolution Turns 25, we look closer at how CRISPR is an evolution of breeding technology as well as an established tool.

"I will never forget that presentation on CRISPR; the flash bulbs went off in my head," he recalled. "I said, 'Wow, this is the equivalent of designer crops in the sense of plant development.'

"Researchers will be able to figure out ways to mitigate evolving problems, such as with pests, much quicker by making a small, incremental change without breeding plants for a decade to correct it," Oswald continued. "That will reduce economic damage to farmers."

Jonathan Phillips, Bayer Crop Science head of weed and pest control research in plant biotechnology, said: "I don't see CRISPR playing a role so much in weed and pest control. I see it improving nutritional benefits of crops, industrial uses, altering crop architecture and improving crop efficiency and drought tolerance. Traits that are already intrinsic to the plant and making them better."

Corteva Agriscience considers CRISPR an evolution of breeding technology. The company's researchers use it to efficiently and effectively create new variations of crops that will be meaningful to growers, explained Tom Greene, global leader of trait discovery. The company is developing waxy corn lines using CRISPR.

"With CRISPR, we now have the ability to mine our deep sequencing knowledge of tropical germplasm, pull out a single gene that's driving disease resistance and precisely put it in the same location of the temperate germplasm," Greene said. "It allows us to create more efficient, high-performing products for growers faster."

CRISPR and seed chipping go hand in hand when it comes to developing new seeds and traits, explained Phillips.

"There is enormous power in this genetic tool, which affects us all," said Claes Gustafsson, chair of The Nobel Committee for Chemistry, in a news release. "It has not only revolutionized basic science but also resulted in innovative crops and will lead to ground-breaking new medical treatments."

Editor's Note: This is the second of the stories in our special Gene Revolution Turns 25 series. Next in the series: New tools that hasten future seed and trait introductions. 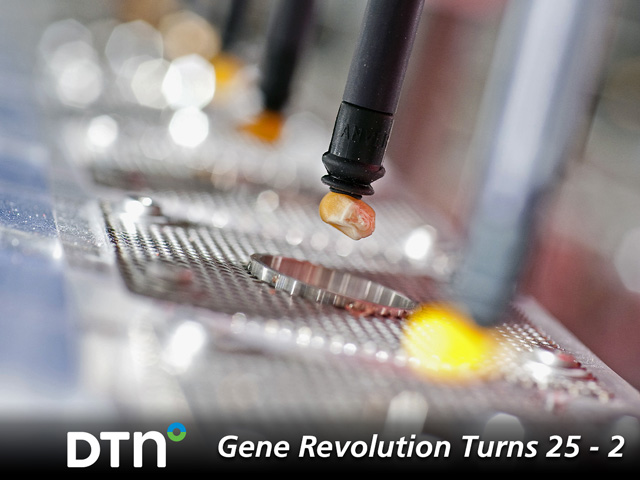