A plywood-mounted transformer, a voltmeter-equipped wand and a pair of bulbous vacuum tubes might appear to be just a random collection of components. But Brian Martinell and Dennis McCabe turned them into a tool that would revolutionize plant breeding and help usher in genetic engineering in agriculture. Their gene gun prototype is now displayed at the Smithsonian's National Museum of American History.

The Agracetus researchers invented the device in 1986, and it played an integral role in the development of Roundup Ready soybeans and biotech crops.

The duo drew inspiration for their work from Cornell University geneticist John Sanford, who, a few years earlier, used a tungsten-loaded .22-caliber pistol to fire foreign DNA-coated microbullets into raw onions to create transgenic plant cells. Scientists were also experimenting with Agrobacterium at the time to insert DNA into plant cells. That had limited success on some plant species in the early 1980s, but not in commodity crops such as soybeans, corn, rice and wheat.

In the next few weeks, DTN/Progressive Farmer is exploring the past and future of genetic engineering breakthroughs in agriculture. In this, the fourth story of our special series called Gene Revolution Turns 25, we examine how the gene gun helped ignite agriculture's biotechnology revolution.

Agracetus, an ag research company in Middleton, Wisconsin, was working on plant transformation in the 1980s. Martinell recalled colleagues laughing when they heard of Sanford's work. But, not McCabe. "Dennis looked at me and said, 'That's brilliant!'"

McCabe and Martinell fashioned their own version of a gene gun in 1986 from scrapped radar station parts McCabe purchased years earlier from the University of Iowa. It consisted of a plywood-mounted transformer, a voltmeter-equipped wand, a pair of vacuum tubes, wires and a 15,000-volt capacitor. "Danger -- High Voltage" signs were hung on and near the contraption, along with a handwritten sticker saying, "Contact with these voltages could be instantly lethal!"

The first prototype didn't have switches, so the scientists manually touched wires to electric terminals to create a high-voltage shock to transform a water droplet into a shock wave that drove DNA-coated microparticles of gold into plant tissue. Blinding flashes of light and explosions accompanied initial experiments.

"It only took a couple days to put the gene gun together to get the first spark discharge, but it took a couple months to get something that didn't explode," Martinell said. "Truth be told, it was extremely dangerous and fatal if you made a mistake. But, we were young and did crazy things. We took risks and didn't worry about it."

Subsequent versions of Martinell and McCabe's electric gene gun became much safer, but the basic principle remained the same. By 1988, they used the gene gun to create the first genetically modified soybeans by bombarding exposed meristems with DNA-coated gold particles.

"Winston came into our lab saying he was ready to sign the document and asked, 'Do you really think this ... works?'" Martinell said. "I remember distinctly Dennis and I looking at each other and looking back saying, 'Yep.'"

Robb Fraley, former executive vice president and chief technology officer at Monsanto, helped the company develop a strain of bacteria containing genes that would make plants resistant to glyphosate, the active ingredient in Roundup herbicide. Even though Monsanto was working with Agrobacterium to deliver genes of interest into host plants, Fraley indicated the Agracetus gene gun was more efficient at inserting the glyphosate-resistance gene into soybean plants at the time.

"The gene gun was one of the first useful tools for plant transformation," Fraley explained. "It was surprising to think you could stick genes on gold particles that could be shot into cells, but the results were compelling."

In the 1980s and early 1990s, farmers struggled to control weeds. Roundup was effective but couldn't be broadcast-sprayed in-season without killing the crops.

"We knew Roundup Ready crops would be important to farmers, but no one expected it to be so popular," Fraley said.

Farmers such as Don Willis, Hillsboro, Tennessee, quickly adopted the technology. Today, more than 90% of soybeans, corn, cotton and canola grown in the U.S. include the glyphosate-resistant trait.

Willis says it was a "no-brainer" to plant Roundup Ready soybeans, which he could spray once or twice, and have clean fields.

"Our soybean yields went up in a hurry and it (weed-control program) was easy," Willis said.

Peter Liebhold, curator of the Division of Work and Industry at the National Museum of American History, in Washington, D.C., said the Agracetus gene gun is an important part of agricultural history.

"This is the beginning of GMOs (genetically modified organisms)," Liebhold said. "In history, you often have incredible moments. Finding an artifact that really connects is difficult, but to me, this is that piece."

For Martinell, the gene gun represents something more. "I remember a farmer friend came to me (shortly after Monsanto introduced Roundup Ready soybeans in 1996) and said, 'I just want to say thank you. You've made my life easy,'" he recalled. "That was so cool, knowing something I helped with was in the field."

Editor's Note: This is the fourth of the stories in our special Gene Revolution Turns 25 series. Next in the series: Looking at why hostility over transgenic technologies remains strong in Europe with little progress to find common ground.

If you missed the first three stories in our series, you can see them at: 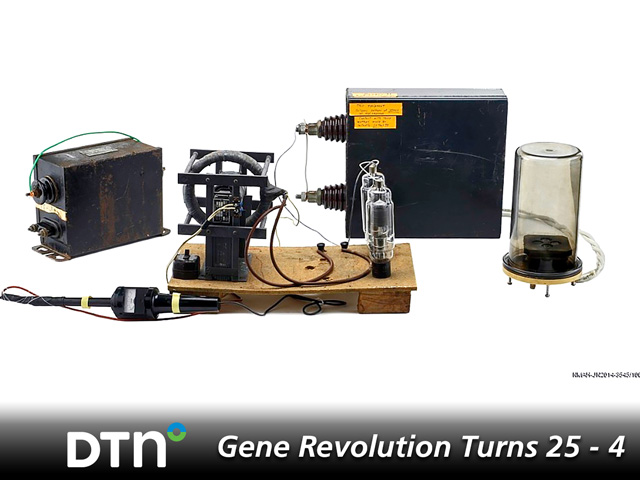