In a country where genetically modified organism (GMO) crops are planted on millions of acres, most Americans don't understand why so many in Europe are opposed to the technology. There is no simple answer.

It's somewhat ironic that nearly an entire continent contests GMOs since Belgium scientist Marc Van Montagu is often referred to as the father of plant biotechnology. Regardless, Europe's anti-GMO stance has long been shaped by social and cultural norms, along with a politically strong "green" movement and a regulatory process that lacks public confidence.

For a few weeks, DTN/Progressive Farmer is exploring the past and future of genetic engineering breakthroughs in agriculture. In this, the fifth story of our special series called Gene Revolution Turns 25, we look closer at the challenges in finding common ground over transgenic technologies in Europe and how that has led to hostility.

LEFT IN A QUANDARY

Those who support the use of transgenic crops and related plant-breeding technology are often left in a quandary.

Agronomy grad student Frederik Vilhelm Larsen, at the University of Copenhagen in Denmark, wants to explore all the science that can potentially help farmers. But, for now, focusing research on GMO technology is largely put aside because it can't be used by farmers there.

"Like everything else, GMOs can be a powerful tool to help with difficult situations farmers face," said Vilhelm Larsen, 26, whose family farms 520 acres two hours from Copenhagen. "The negative attention comes from overusage of the same herbicide tech and corresponding emergence of herbicide-resistant weeds, which risks increases in total herbicide usage."

As a result, additional GMO benefits like crops containing Bt that fight crop pests and diseases aren't given their due. "Everyone likes a crop that can take care of itself," he said. Larsen's family grows winter wheat, barley, rapeseed, grass seed and fava beans.

In 2015, a European Commission rule was passed that gave EU countries the ability to opt out of growing GMO crops even though many countries already had a de facto ban in place. Nineteen countries chose not to grow GMOs, with the major ones being Austria, France, Germany, Greece, Italy, Poland and Scotland.

There are countries other than those in the EU that oppose GMOs. For example, a moratorium on GMOs exists in Russia through 2023. However, Europe is one of the world's biggest trading blocks. European countries are major allies of the U.S., and their members have been international leaders in the environmental and "green" movements, many whose platforms are anti-GMO.

A significant battle happening now is about whether the new CRISPR technology that can "edit" genes within a plant will be considered a GMO or is in an approvable category of its own. CRISPR is already being used on crops like cherry tomatoes (larger fruit/disease resistance) and mushrooms (resistance to browning). CRISPR is a very precise way of altering or deleting existing DNA to obtain a desired outcome. The process differs from more traditional transgenic modifications that use genetic material from other plants, bacterium or animals to create a desired trait.

"In general, I hope the CRISPR technology or some versions of it could be seen as non-GMO technology and would advance conventional breeding for all of the ag sector," Vilhelm Larsen said.

The EU has been importing GMO soybeans from North and South American for several years, exempted because the crop is needed for livestock feed. Despite this, the majority of the EU countries have been adamant in opposition to growing GM crops. A Pew Research Center international survey in 20 countries (including the U.S.), conducted from fall 2019 through March 2020, found that overall, 48% of respondents view GMO foods as unsafe to eat as opposed to 13% who believe they are safe. Results varied by country. Nearly 70% of Russians surveyed believed GMO foods were unsafe, while in the U.S., that number was 38%.

This uncertainty contrasts sharply with general scientific studies, which have determined on numerous occasions that foods derived from GMO crops are safe. Most importantly in the U.S., the National Academies of Science, Engineering and Medicine have weighed in, issuing a report on the topic in 2016 agreeing that GMO crops and products made with them are safe.

Still, the stigma against GMO crops remains and can even affect how scientists perceive their work and careers. Devang Mehta, a native of Bombay, India, who received a Ph.D. in plant biotechnology from the research university ETH Zurich, in Switzerland, essentially moved from direct GMO research involving cassava into more basic plant biology research at the University of Alberta, in Canada.

"I had worked on the tropical plant, cassava, which feeds about a billion people worldwide," said Mehta, who was interested in using technologies like CRISPR to reduce viral diseases in the plant. "It wasn't so much that I experienced backlash personally; it was more like I'd be at a dinner party with other scientists and tell someone what I did, and be met with a kind of silence or negative comments about the technology."

Other Ph.D. students in Zurich working on GMO crops have had research fields destroyed by activists. At other times, paint has been splashed on researchers' cars, Mehta explains.

"I'm also glad to be moving away from transgenic research," Mehta wrote in an article for digital media company Massive Science and syndicated on Slate, "because anti-GMO activism over the last couple of decades has made a career in GMO research a risky proposition."

The condemnation of GMOs from European farmers isn't universal. Martin Mogensen, whose Danish family farms 2,400 acres of wheat, barley, canola and grass seed while keeping a 1,000-sow operation, would like more options.

"As I see it, the green agenda in Europe wants us to use less chemistry but doesn't want us to use the tools that would get us there faster," he said. Technology like CRISPR would be a huge step forward. Particularly, he explained, plants that could resist fungi would be more valuable than plants that resist any herbicide.

Some European countries do grow specific GMO crops. The Czech Republic, Portugal, Slovakia and Spain are among them. In 2019, The Danish Council on Ethics recommended updating its laws to allow some genetic modifications to be used. Council members said at the time that plant modifications can help crops deal with the effects of climate change, which is fostering an increase in pest and disease infestations. The recommendations haven't yet resulted in any changes in the country's (or EU) laws.

French farmer Remi Dumery works 400 acres of durum wheat, barley, sugar beets, corn, soybeans and canola in the central part of the country, near Orleans. He said he would like more tools such as GMO traits but isn't optimistic that will happen in the near future.

"There is a paradox in France," Dumery explained. "People refuse genetic manipulation techniques on plants, but a recent telethon collected millions of euros in donations to carry out genetic manipulation to cure myopaths (diseases such as muscular dystrophy). Genetics are one of the keys to our food and energy production in a renewable mix."

Initially, Dumery said, EU farmers believed they would get a premium by remaining non-GMO, but that added value has generally been captured by distributors and has not trickled down to farmers. As in Denmark, he sees glimmers of hope if genetic manipulation can overcome serious vexing issues facing some crops.

"Hope may come from the sugar beet jaundice crisis," Dumery believes, "if NBT (new breeding technologies) techniques can create varieties resistant to jaundice viruses and dispense with neonicotinoids (a class of insecticides) within three years."

France tested some GMO corn into the early 2000s until protests resulted in a ban. Much of the anti-GMO sentiment is believed to be the result of the strength of environmental activist non-governmental organizations and the Green Party, particularly in Germany. Additionally, mad cow disease scared much of the public, with governments and the EU taking different positions on the safety of beef. Consumers remained uncertain and fearful.

Many in the EU likely fear the situation where a crop containing GMOs would be uncontrolled inside and outside of farm fields, explained Danish agricultural journalist Niels Damsgaard Hansen. "For a few, the opposition is merely based on using the GMO technology for Roundup Ready crops instead of other traits like resistance to disease and pests."

Hansen doesn't see EU opposition to the technology going away anytime soon. "I don't think most EU farmers find it harmful not having access to the present GMO crops," he said. "Especially considering that soya, corn and cotton are not as important in most of the EU as in the U.S. If GMO crops or CRISPR crops in the future introduce other valuable traits (that directly benefit consumers), it might be another situation."

Editor's Note: This is the fifth of the stories in our special Gene Revolution Turns 25 series. Next in the series: a look at how biotech crops changed the agricultural landscape forever, for better or worse.

If you missed the first few stories in our series, you can see them at: 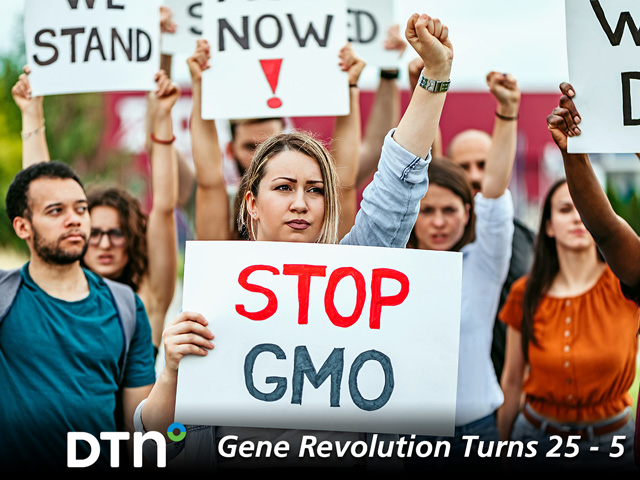