Following up on DTN Senior Analyst Dana Mantini's bearish warning about soybean meal last week, March soybean meal posted a new contract high of $487.00 Wednesday but finished the week-ending Jan. 20 down $12.60 at $463.70, below the previous week's low. The lower close qualifies the move as a weekly bearish outside reversal, one of the stricter forms of technical reversal, which suggests a possible top in the market. In this case, Friday's Commitments of Traders report said noncommercial net-longs totaled 166,350 as of Jan. 17, the most in four years. These positions are now a potential source of selling, also encouraged by a bearish turn in the weekly stochastic indicator. Fundamentally, Argentina received rain over the weekend and Brazil's record soybean harvest is just getting started.


March soybean oil closed down 2.09 cents at 61.97 in the week ending Jan. 20, holding quietly below the 100-day average at 65.00 cents, but also holding above the low of the weekly reversal made at 58.50 cents on December 12. Fundamentally speaking, soybean oil should remain popular, while supplies of ultra-low sulfur distillates, used to make diesel fuel, are at their lowest level in nine years and March diesel futures just posted a new two-month high Friday. Technically, the weekly bullish reversal made in mid-December has not been challenged yet and remains a hint of higher trading ahead. A close in March soybean oil above the 100-day average, if it happened, would signal a bullish change in momentum, but until then, prices are holding sideways after their bearish sell-off in early December.


March KC wheat closed up 4 1/4 cents at $8.48 the week ending Jan. 20, appearing to build a long base of possible support that dates back to late July. Friday's CFTC data showed noncommercials net-short 8,731 contracts of KC wheat as of Jan. 17, and so far, bearish traders have kept wheat prices under bearish pressure for the past three months. The one hint of possible bullish support happened after March KC wheat posted its lowest close in 11 months on Jan. 10, but has not been able to close lower since. On a weekly chart, the technical hint of support is termed a non-overlapping close and is supported by commercials that are net-long 11,318 contracts. It would probably take a close above at least $9.00 to turn the weekly stochastic higher and get specs to start worrying about their short positions. 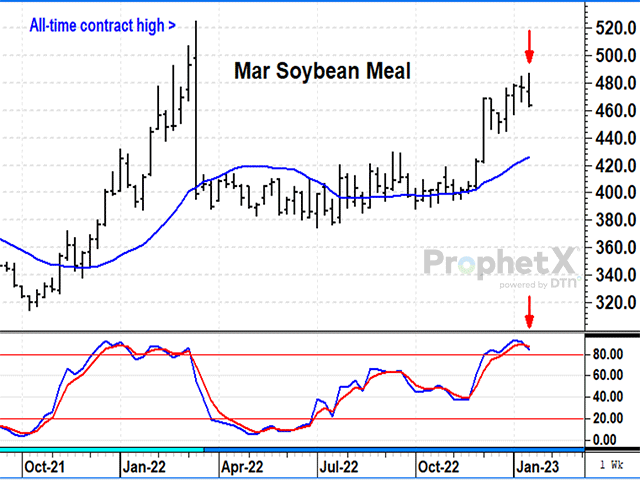