The soybean rise has been supported by not only export sales which are running 4% above year ago levels, but also the sharp September-to-November rise in bean oil, which has been fueled by the surge in renewable biodiesel capacity, and the ongoing impact of extreme drought in Argentina. In addition to that, the U.S. crushing industry has been on a roll, with the best margins in years. Soybean inspections are trailing last year by 7%, and without a pick-up in shipments, surely hampered by the low water levels on the Mississippi River, USDA could be forced to lower U.S. soy export projections.

Brazil's weather, save for too much dryness in Rio Grande do Sul, has been little short of ideal. That crop, should the favorable conditions continue, is on pace to be record large by far. The December WASDE pegged the soy crop at 152 million metric tons (mmt) -- 25 mmt (1 bb) larger than a year ago. However, some private crop scouts and firms have production possibly moving as high as 156 mmt to 160 mmt (5.88 bb). So, with Brazil production, at the minimum expected to be more than 1 billion bushels (bb) larger than last year, with potential to be 1.1 bb larger or more, any Argentine loss should be more than offset by the prolific Brazil crop. Starting in February Brazil soy FOB offers are a huge discount to those of the U.S. A note of caution is that Argentina is the world's No. 1 soy product exporter, and soybean futures could be unduly influenced by product prices.


After hitting a recent low on Dec. 6, Chicago March wheat has been stair-stepping higher, and is getting very close to the 50-day moving average -- a level that it has not been above since early November. The 50-day is just 14 cents above the Friday close. Any rally and close above the 50-day average could encourage funds to begin to reel in their sizable, short position in Chicago March. As of the close on Tuesday, Dec. 27, the net managed money fund short was reported to be nearly 37,000 contracts. With the ongoing southwestern Plains drought, problems in Argentina's wheat crop, and the uncertainty in the Black Sea, the potential is there for a bullish surprise in wheat, which has both U.S. and world wheat supplies near 15-year lows.


Soybean meal futures have been on a parabolic rise since late November as the Argentine drought, with only minor interruptions, has expanded. The soybean crop there is currently rated at just 10% good to excellent, with nearly 70% of the crop now planted. Argentina has surely lost production potential on their soy crop, and that would obviously have a detrimental impact on the ability to produce soy meal. Argentina is the world's No. 1 exporter of soybean products. However, U.S. soybean meal futures have been on a tear of late, driven by the current weather. U.S. soybean meal exports have not really benefitted and remain lower than a year ago. Commodity funds have made an aggressive bet on the long side of the soy meal market, with the net managed fund long, as of Dec. 27, at a hefty 130,000 contracts. The market appears to be getting ahead of itself, and should rain improve in Argentina, which appears to be on the horizon, look for any fund liquidation to set off a sizable correction. Adding to the potential for such a correction is the prospect for Brazil to harvest a huge record soy crop.

Dana Mantini can be reached at Dana.Mantini@dtn.com 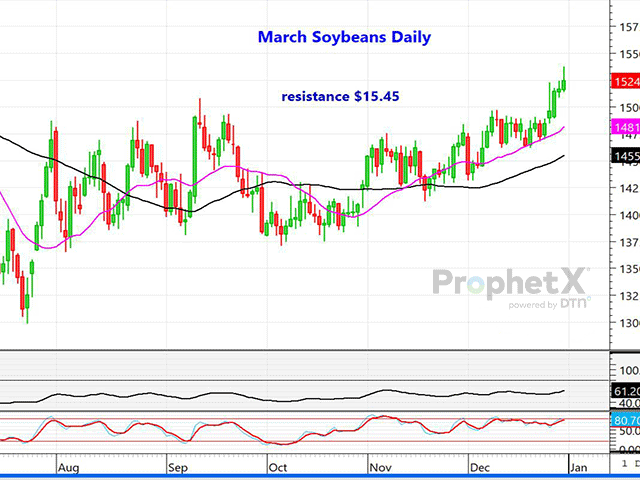