December corn: December corn closed up 13 1/4 cents last week at $3.84 3/4, largely due to the bullish influence of last Monday's lower-than-expected finding of Sept. 1 corn stocks from USDA. 2.11 billion bushels (bb) of carry into 2019-20 will also reduce USDA's new-crop ending stocks estimate, set to be released Thursday. Technically, last week's higher move turned the weekly stochastic bullish and means the September low of $3.52 1/4 will likely stand as the seasonal low. Fundamentally, it is difficult to see much bullish potential in corn prices while exports are struggling, but there is a risk of crop loss before harvest.

November Soybeans: November soybeans climbed 33 1/4 cents last week to $9.16 1/4, near its highest prices in over two months. It is looking like this year's smaller soybean crop set a seasonal low on Sept. 9, roughly one month earlier than usual this fall. Lack of trade with China remains a large, bearish concern for soybeans and the next U.S.-China trade meeting is set for Oct. 10-11. Technically speaking, the weekly soybean chart looks clearly bullish with prices back above their one-year average and the weekly stochastic turned up. The one-year high at $9.71 offers potential resistance.

December KC Wheat: December Kansas City wheat lost 3 1/2 cents last week, ending a quiet week of trading at $4.04. Even though drought is an early concern in central Texas and December KC wheat prices are near 13-year lows, winter wheat planting is on schedule. Technically speaking, this is a good place for KC wheat prices to find long-term support, but so far, the case for a bullish turn has not been convincing on either the weekly or monthly stochastic indicators. U.S. wheat exports are more active than they were a year ago, but as long as USDA's estimate of U.S. ending wheat stocks remains near 1 billion bushels, it is difficult to make a case for significantly higher wheat prices.

Todd Hultman can be reached at todd.hultman@dtn.com 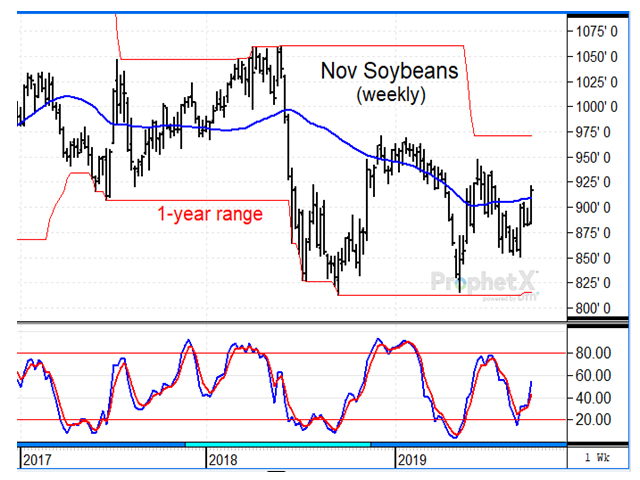