Feeder Cattle: The August contract closed $6.275 lower at $137.625. Similar to live cattle, August feeders extended Wave 2 of its 5-wave secondary (intermediate-term) uptrend to a test of the previous low of $135.00. August feeders have more room to move lower without setting a new low, indicating some follow-through selling could be seen early this coming week.

Class III Milk: The June contract closed $0.20 lower at $15.66. The market extended its secondary (intermediate-term) uptrend to last week's high of $16.14 before falling to a lower weekly close. This allowed weekly stochastics to establish a bearish crossover above the overbought level of 80%, signaling a possible change to a secondary downtrend. Confirmation of this would be a move to a new 4-week low below $14.90.

Soybean meal: The July contract closed $2.30 lower at $376.30. The contract continues to move toward a secondary (intermediate-term) downtrend with last week's close near the weekly low of $374.30 setting the stage for a potential new 4-week low below $373.80.

Corn (Cash): The DTN National Corn Index (NCI, national average cash price) closed at $3.68, up 7 cents for the week. The NCI continues to consolidate below its recent high of $3.72, with weekly stochastics above the overbought level of 80%. Support is at last week's low of $3.61 with resistance the recent high of $3.72. 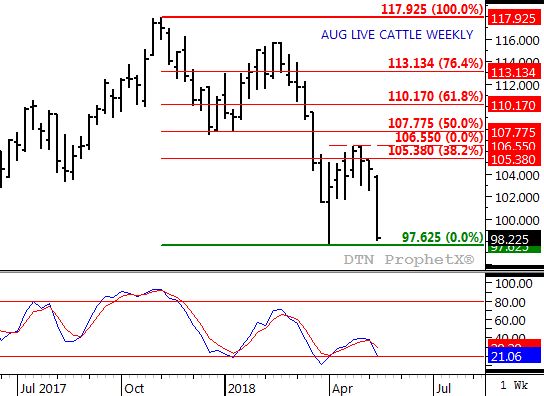