Oats: The July 2018 contract closed at $2.42, up 8 cents for the week. The contract remains in a secondary (intermediate-term) 5-wave uptrend, with initial resistance at $2.47. This price marks the 33% retracement level of the previous downtrend from $3.00 1/2 through the low of $2.20 3/4. Weekly stochastics are bullish and back above the oversold level of 20% following a bullish crossover the week of April 23.

Rice: The July 2018 contract closed at $12.325, down 33 cents for the week. July rough rice remains in a secondary (intermediate-term) 3-wave downtrend with last week's move below initial support near $12.335 a extension off Wave A (first wave). The contract could roll into Wave B at any time, particularly given its close proximity to initial support. This wave would be expected to challenge the previous high of $13.28 once it is established.

Cotton: The July 2018 contract closed at 86.55 (cents per pound), up 1.93 cents for the week. The contract continues to indicate a potential turn to a secondary (intermediate-term) downtrend, despite last week's higher close. However, a move above the previous high of 88.08 would nullify initial signals. Weekly stochastics have climbed back above the overbought level of 80%, in position for a potential bearish crossover. The market's major (long-term) trend on its monthly chart remains up with initial resistance at 92.58.

Sugar: The July 2018 contract closed at 11.66 (cents per pound) up 0.44 for the week. The contract continues to build toward a secondary (intermediate-term) uptrend, initial signaled by the bullish crossover of weekly stochastics the week of April 23. A clear indicator of an uptrend would be a move to a new 4-week high beyond 11.91.

Cocoa: The July 2018 contract closed at $2,678 (per metric ton), down $127 for the week. The contract looks to be in a secondary (intermediate-term) downtrend with the initial signal being a bearish crossover by weekly stochastics above the overbought level of 80% the week of April 2. Confirmation of this new trend would be a new 4-week low below last week's low of $2615. 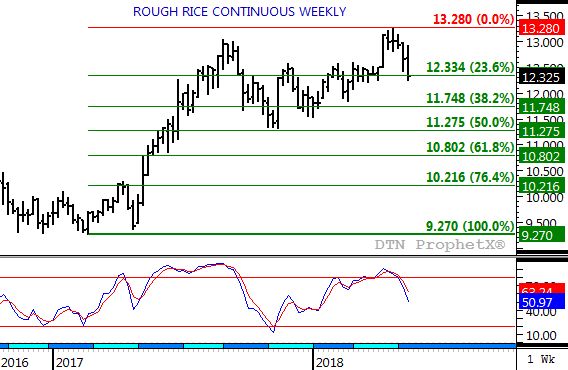