Live Cattle: The June contract closed $1.575 higher at $107.625. June live cattle fought off the previous week's bearish outside range to move higher last week, extending Wave 1 of its 5-wave secondary (intermediate-term) uptrend. Next resistance is near $109.30, a price that marks the 50% retracement level of the previous downtrend from $121.525 through the low of $97.075.

Feeder Cattle: The August contract closed $2.425 lower at $143.90. Unlike live cattle, August feeders saw continued pressure from the previous week's bearish outside range. This would indicate the contract is in Wave 2 of its 5-wave secondary (intermediate-term) uptrend. Last week's low of $141.15 was a test of support near $142.05. Characteristically, Wave 2 sees a deeper retracement of Wave 1, keeping the door open to another move lower to test support between $139.65 and $138.30.

Class III Milk: The June contract closed $0.30 higher at $15.86. The market extended its secondary (intermediate-term) uptrend to last week's high of $16.09 before pulling back a bit at Friday's close. Though weekly stochastics are well above the overbought level of 80%, next upside resistance is at $17.20. This price marks the 38.2% retracement level of the previous downtrend from $25.30 through the low of $12.20.

Corn (Cash): The DTN National Corn Index (NCI, national average cash price) closed at $3.61, down 09 cents for the week. Though no clear turn signal has been created, the NCI may have established an earlier than normal seasonal top. The previous week's close of $3.70 was a test of resistance at $3.73, a price that marks the 76.4% retracement level of the downtrend from $4.01 through the low of $2.85. Meanwhile, weekly stochastics have posted a series of bearish crossovers above the overbought level of 80% with the latest being at the close of last week. If the NCI leaves a bearish gap down this coming week, and maintains it through Friday's settlement, it would establish an island-top on its weekly chart. 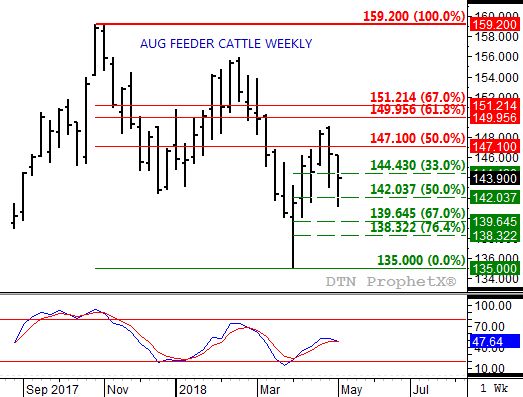