Oats: The July 2018 contract closed at $2.34, down 1 cent for the week. While the contract still looks to be in a secondary (intermediate-term) 5-wave uptrend, last week saw July oats post a bearish outside range. After testing initial resistance at $2.47 the contract fell back below the previous week's low of $2.32 3/4. It's possible this is indicating Wave 1 has come to a quick end, meaning Wave 2 could test the previous low of $2.20 3/4. Weekly stochastics continues to hold near the oversold level of 20%.

Cotton: The July 2018 contract closed at 84.62 (cents per pound), down 2.28 cents for the week. Last week's lower close could be seen as a warning sign that a turn to secondary (intermediate-term) downtrend is in the offing. While no clear turn signal has been established yet, the contract needs to be watched closely if follow-through pressure develops this week. Initial support is at the 4-week low of 81.36.

Coffee: The July 2018 contract closed at 119.40 (cents per pound), down 3.20 cents for the week. While the contract remains in a 5-wave secondary (intermediate-term) uptrend, the recent pullback from its high of 125.95 still looks to be a signal that Wave 1 peaked. If so, Wave 2 would be expected to retrace nearly all the way back to the previous low of 115.30. Weekly stochastics remain bullish following a crossover below the oversold level of 20% the week of April 9.

Sugar: The July 2018 contract closed at 11.22 (cents per pound) down 0.29 for the week. For now the contract's secondary (intermediate-term) trend could be classified as sideways. If it holds support at the recent low of 10.93 it could be argued Waves 1 and 2 of a 5-wave uptrend have been completed. The most recent by weekly stochastics was a bullish crossover below the oversold level of 20% the week of April 23.

Cocoa: The July 2018 contract closed at $2,805 (per metric ton), up $28 for the week. The contract looks to be moving into a secondary (intermediate-term) downtrend as it continues to consolidate below its recent high of $2,943. Weekly stochastics established an initial bearish crossover above the overbought level of 80% the week of April 2, and a confirming crossover the week of April 30. 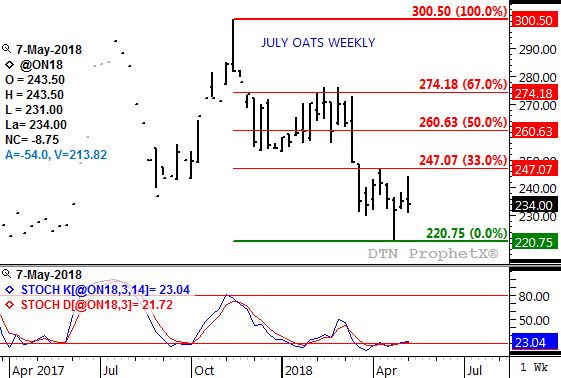