Corn (Cash): The DTN National Corn Index (NCI, national average cash price) closed at $3.63, up 13 cents for the month. The NCI is in a major (long-term) uptrend, with the ongoing rally looking to be Wave 3 of a 5-wave pattern. The April settlement of $3.63 is a test of resistance at $3.62, a price that marks the 76.4% retracement level of the previous downtrend from $3.89 through the low of $2.73. Seasonally the NCI could be nearing a top, and if so, the next sell-off would be viewed as Wave 4.

Soybean meal: The July contract closed at $393.80, up $9.80 on the continuous monthly chart. The market remains in a major (long-term) uptrend on its monthly chart, with the July contract testing resistance at $400.30. This price marks the 50% retracement level of the previous major downtrend from $541.80 through the low of $258.90. Monthly stochastics are nearing the overbought level of 80%. 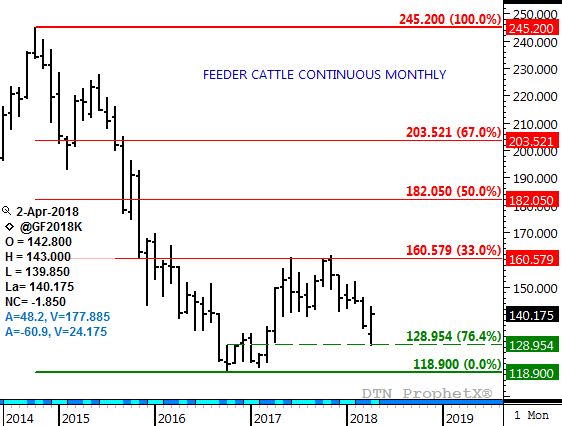