Oats: The July 2018 contract closed at $2.36, down 5 1/2 cents for the week. Despite the lower weekly close, July oats still look to be in the early stages of a secondary (intermediate-term) 5-wave uptrend. After an initial rally took the contract to a high of $2.47 the previous week, a test of resistance at $2.46 1/2, a move back to near the recent low of $2.30 could be viewed as Wave 2 of the ongoing uptrend. However, a move to a new low would nullify previous bullish signals.

Rice: The July 2018 contract closed at $12.99, down 12 cents for the week. The contract posted a new high of $13.215 last week on the continuous weekly chart, before closing lower. This opens the door to a possible turn to a secondary (intermediate-term) downtrend, particularly with weekly stochastics sitting above the overbought level of 80% and nearing a bearish crossover.

Cotton: The July 2018 contract closed at 74.11 (cents per pound), down 1.64 cents for the week. The contract continues to show a possible head-and-shoulders top formation on its weekly chart, implying a move to a secondary (intermediate-term) downtrend. This fits with weekly stochastics that established a bearish crossover above the overbought level of 80% the week of January 8, 2018, and a confirming bearish crossover the week of January 22. However, last week saw the contract post a bullish outside range, indicating continued buying interest could be seen over the coming weeks. Key will be how the contract acts as it tests the previous high of 85.83, the head of the topping formation.

Sugar: The July 2018 contract closed at 11.87 (cents per pound) down 0.33 cent for the week. The contract extended the downtrend on its weekly chart last week to a new low of 11.77 despite weekly stochastics in single digits reflecting a sharply oversold situation. Ultimately this could lead to a bullish turn. Major (long-term) support on the market's monthly chart is at 10.13 the low from August 2015.

Cocoa: The July 2018 contract closed at $2,729 (per metric ton), up $153 for the week. The contract extended its secondary (intermediate-term) uptrend last week, hitting a high of $2,856 before falling back. Major (long-term) resistance is between $2,771 and $3,011, though weekly stochastics posted a bearish crossover above the overbought level of 80% the week of April 2. This could lead to renewed selling interest over the coming weeks. Initial support is at the recent low of $2,457. 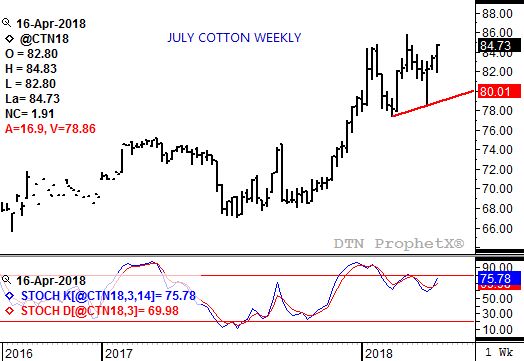