Lost in the excitement of last Thursday's post-report rally in grain and oilseeds was a new minor (short-term) uptrend in new-crop July Kansas City wheat (KWN8). After posting a new low, for the previous downtrend, of $4.75 1/2 early Thursday morning the contract easily took out Wednesday's high of $4.86 1/2 before closing Thursday's session at $4.86 1/4, up 6 1/4 cents for the day.

Note a couple things about that range: First, Thursday's action continued a test of support near $4.81 1/2, a price that marks the 67% retracement level of the previous secondary (intermediate-term) uptrend from $4.40 1/4 through the high of $5.65. Second, Thursday's session saw KWN8 establish a bullish minor reversal signaling the end of the previous short-term downtrend and the beginning of a new uptrend.

Now take a look at daily stochastics (bottom study). Thursday's rally also led to a bullish crossover below the oversold level of 20%, confirmation that the short-term trend has turned up. Also note that this was a secondary (confirming) bullish crossover to the one established at the end of the March 23 session.

Lastly, the overnight (Sunday evening through early Monday morning) low of $4.91 left a small bullish price gap above last Thursday's high of $4.90 3/4. This would be considered a breakaway gap, yet another signal indicating the minor trend is now up.

Initial resistance is near $5.05, a price that marks the 33% retracement level of the previous downtrend from the $5.65 high through Thursday's low of $4.75 1/2. Note that this also held the interim rally between recent lows with a high of $5.04. Based on the idea of flipped trading ranges on a breakout, a move above this initial resistance would indicate a test of the 67% retracement mark of $5.35 1/2 is in the not too distant future. 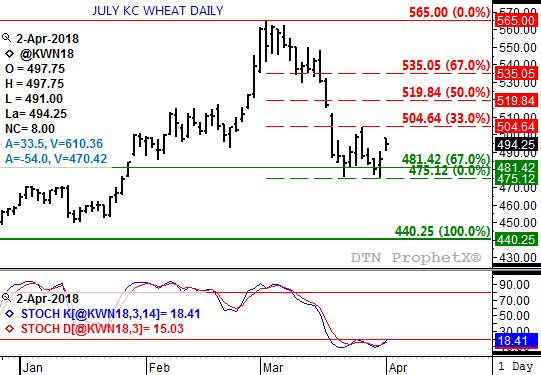