Distillates: The spot-month contract closed 19.84cts lower at $1.8551. The market extended its recently established secondary (intermediate-term) downtrend, with the spot-month contract testing initial support at $1.8376 (last week's low was $1.8302). With pressure coming from both commercial and noncommercial traders, the market should soon fall to its 38.2% retracement level of $1.6486 and possibly the 50% retracement mark of $1.6486. The market is also nearing a bearish change in its major trend on the long-term monthly chart.

Gasoline: RBOB gasoline futures market closed 17.18cts lower at $1.7002. The market extended its recently established secondary (intermediate-term) downtrend with the spot-month contract posting a new 4-week low of $1.6704. Initial major (long-term) support is at $1.7039 on its monthly chart, then near $1.55. 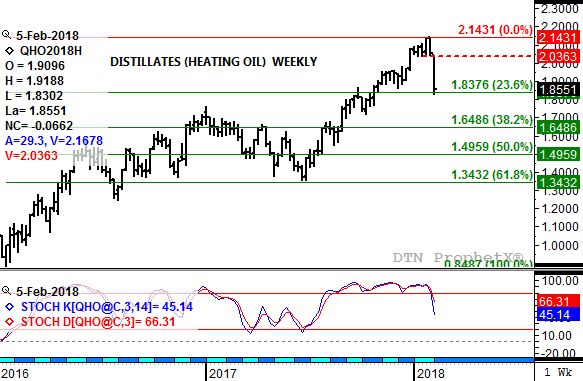