Feeder Cattle: The January contract closed $5.100 lower at $145.225. The contract remains in a secondary (intermediate-term) downtrend. Next support is at $114.075, a price that marks the 38.2% retracement level of the previous uptrend from $114.95 through the high of $162.075. The 50% retracement level is near $138.50. Weekly stochastics are bearish and still well above the oversold level of 20% indicating a likely extension of the downtrend.

Lean Hogs: The February contract closed $1.325 higher at $70.725. The contract's secondary (intermediate-term) trend still looks to be down following the recent bearish crossover by weekly stochastics above the overbought level of 80%. Also, the contract is now showing consecutive lower weekly highs with the interim low at $66.25. This price is near 50% retracement support at $66.925, with the 61.8% level down near $65.425.

Corn (Cash): The DTN National Corn Index (NCI.X, national average cash price) closed at $3.11 3/4, down 3 cents for the week. Despite the lower weekly close the NCI.X remains in a secondary (intermediate-term) uptrend on its weekly close-only chart. Having broken initial resistance at $3.11 3/4, a price that marks the 23.6% retracement level of the previous downtrend from $3.48 through the low of $3.00 1/2, next resistance is at the 38.6% retracement level near $3.18 3/4. Weekly stochastics are bullish but nearing the overbought level of 80%.

Soybean meal: The more active March contract closed $2.20 higher at $335.70. Though weekly stochastics have not climbed above the overbought level of 80%, March soybean meal looks to have established a spike high of $351.20 last week. However, this can't be called a spike reversal given the contract closed higher for the week. Therefore, look for the contract to regain some of the ground it lost late in the week, pulling stochastics above 80% and setting the stage for a bearish crossover signaling a move to a secondary (intermediate-term) downtrend. 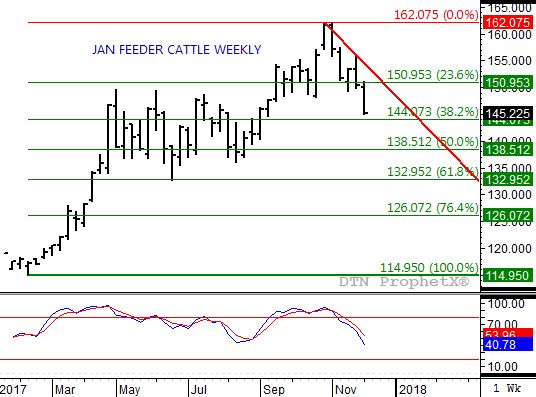