Corn (Cash): The DTN National Corn Index (NCI.X, national average cash price) closed at $3.11 3/4, down 3 cents for the week. Despite the lower weekly close the NCI.X remains in a secondary (intermediate-term) uptrend on its weekly close-only chart. Having broken initial resistance at $3.11 3/4, a price that marks the 23.6% retracement level of the previous downtrend from $3.48 through the low of $3.00 1/2, next resistance is at the 38.6% retracement level near $3.18 3/4. Weekly stochastics are bullish but nearing the overbought level of 80%.

Corn (Old-crop Futures): The March 2018 contract closed 6.0cts lower at $3.2 3/4. Based on still bullish weekly stochastics and the previous week's bullish outside range, March corn remains in a secondary (intermediate-term) uptrend. However, the contract is now vulnerable to a move below its previous low at $3.48 3/4. If this happens next major (long-term) support on the monthly chart is at $3.39.

Corn (New-crop Futures): The December 2018 contract closed 4.75cts lower at $3.85. While there are similarities to old-crop, new-crop December 2018 did not see a bullish crossover by weekly stochastics below the oversold level of 20%. This leaves open the door to a test the contract low of $3.81 1/4, pulling stochastics into oversold territory, creating the possibility of stronger indications of a secondary (intermediate-term) uptrend over the coming weeks.

Soybeans (Cash): The DTN National Soybean Index (NSI.X, national average cash price) closed at $9.17, down 4 3/4 cents for the week. Cash soybeans' secondary (intermediate-term) trend turned down last week. The NSI.X posted a spike reversal, establishing a new high for the previous move of $9.35 1/4 before closing the week at its low. At the same time, weekly stochastics established a bearish crossover above the overbought level of 80%, confirming a move to a new downtrend.

Soybeans (Old-crop Futures): The January 2018 contract closed at $9.89 3/4, down 4 1/2 cents for the week. For now the contract is a confusing combination of technical signals. The move to a new 4-week high of $10.15 followed by a lower weekly close would suggest a bearish spike reversal. Weekly stochastics posted a bearish crossover but well below the overbought level of 80% suggesting a short-term sell-off is possible. Volatile spikes have become the norm in a market struggling to establish a secondary (intermediate-term) trend.

Soybeans (New-crop Futures): The November 2018 contract closed at $10.04 3/4, down 4 1/4 cents for the week. After a spike rally to $10.24, just short of its previous high of $10.28 3/4, November soybeans closed even with the weekly close from two weeks ago. The fact weekly stochastics did not establish a bearish crossover above the overbought level of 80%, just missing it by mere percentage points, leaves open the possibility of a retest of recent highs. However, it is also likely the contract sees follow-through selling from last week's close as the new week gets under way. 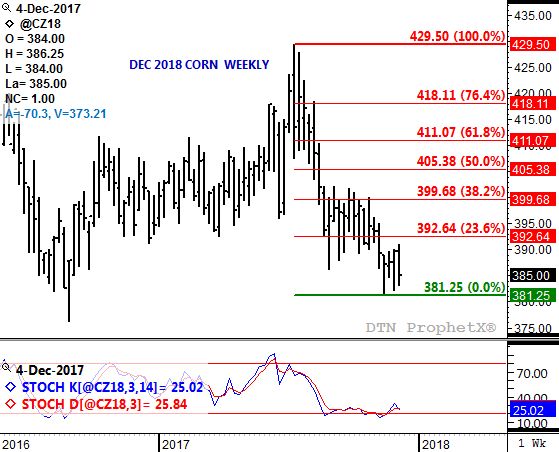