If you've been following the financial news lately, and I mean besides the daily firing of one person or another, you've likely seen "Bitcoin" talked about. Everywhere. Two of DTN's best and brightest analysts/columnists have also tackled the topic of the crypto-currency. Back on November 8 Elaine Kub's column "Grain Markets Could Benefit from Blockchain Technology" introduced many of our readers to the process behind bitcoin after the CME announced it would be starting a futures market by the end of 2017. This past Tuesday Todd Hultman's column "Bitcoin and Corn: It's a Matter of Trust" furthered the discussion by showing what corn would look like priced in the new global electronic currency.

As for me, I sit back and look at bitcoin's weekly chart and I see the reincarnation of pork bellies, at least in this stage of the game. This chart is of the CME real-time price of bitcoin found on DTN ProphetX. Do you see that spike high this week to $11,380.23? That happened Wednesday, before the currency fell back to close at $10,762.96. Early Thursday morning finds bitcoin priced back below $10,000 at $9,300. Down 16% in less than 24 hours.

How are you feeling about your new global currency now?

Oh, you don't think the U.S. dollar will go the way of the dodo bird? Think again. Bitcoin, and similar unregulated electronic currencies, are the future of global economics whether we dinosaurs want to admit it or not. Just as electronic trading, once introduced, quickly made pit trade extinct so too will electronic currencies devour standard paper money. It's simply a matter of time.

But back to the technical analysis. Other than pointing out the obvious rapid ascent and pull back of bitcoin, there's not much history to learn from. What type of sell-off would get those who don't remember pork bellies of the past attention?

If we use $0 as a starting point and Wednesday's peak as a high, a 23.6% retracement comes in at $8,694.50. Notice that is in line with last week's high and this week's low (so far). If bitcoin were to retrace 50%, back to $5,690.11, it would test the low from two short weeks (that's all, really) ago when the currency posted a bullish outside range. According to another young market analyst I know, one who has been on top of the bitcoin phenomenon (as well as Tesla, Apple, Netflix, etc.) from the beginning, a sell-off of that magnitude would bring in all kinds of buyers.

And he has never even heard of pork bellies. 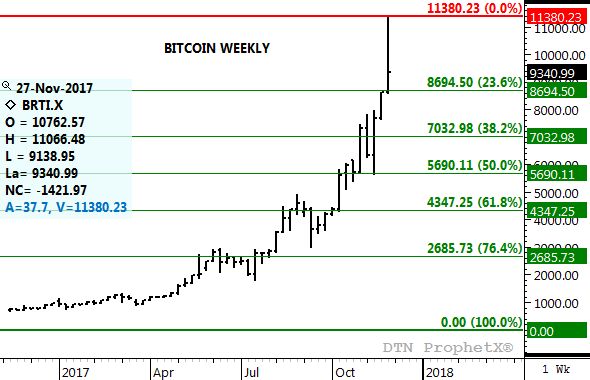