Live Cattle: The December contract closed $6.725 lower at $120.575. The contract established a 2-week reversal last week, following up the previous week's limit-up rally and close near weekly highs with a sharp sell-off and close near weekly lows last week. This would indicate the secondary (intermediate-term) trend has turned down. However, the contract is already testing support at $119.80, a price that marks the 38.2% retracement level of the previous uptrend from $106.725 through the recent high of $128.875. Given the bearishness of the December-to-March futures spread the contract could extend its sell-off below the 50% retracement level of $117.30, with possible targets being the 61.8% retracement mark of $114.80 and the 76.4% level near $111.725.

Feeder Cattle: The more active January contract closed $4.35 lower at $157.175. The contract moved to a secondary (intermediate-term) downtrend as it established a 2-week reversal on its weekly chart in conjunction with a bearish crossover by weekly stochastics above the overbought level of 80%. Initial support is near $150.95, a price that marks the 23.6% retracement level of the previous uptrend from $114.95 through the recent high of $162.075. The 50% retracement mark is near $138.50.

Corn (Cash): The DTN National Corn Index (NCI.X, national average cash price) closed at $3.03 3/4, down 3 1/2 cents for the week. For now the secondary (intermediate-term) trend could still be considered sideways. The NCI.X needs to see a weekly close above its previous high weekly close of $3.08 1/2 to indicate a move into a normal seasonal uptrend that tends to last through early June. Support is at a weekly close of $3.00.

Soybean meal: The December contract closed $0.60 higher at $314.50. The contract looks to be in secondary (intermediate-term) and major (long-term) sideways trends. Support this month on the long-term monthly chart is calculated at $309.20 while resistance is at $346.20. 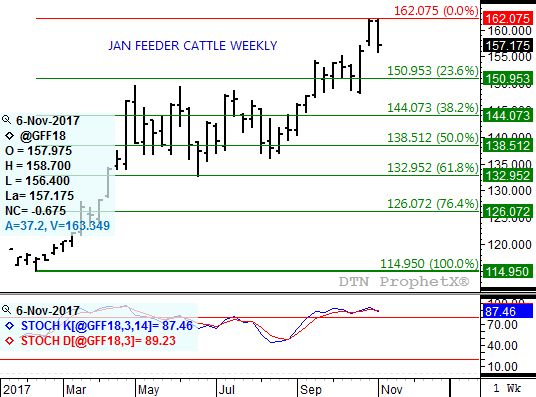