If one was so inclined they could summarize the soybean market with, "There's a big wedgie in the beans." They wouldn't be wrong, but most likely they would be looked at rather quizzically.

Note that the contract is running out of room to move as the trendlines converge. This past week's resistance was calculated at $10.03 1/2, support at $9.86 1/4. The coming week sees a tightening range between the lines of $10.00 1/4 and $9.90. As is usually the case with a wedge formation, sooner or later something, either resistance or support, is going to give. The question is, which is more likely to give this time in Jan beans, support or resistance?

To answer that, shift your eyes down to the bottom study: Weekly stochastics. Stochastics measure momentum based on how the contract closes within whatever timeframe's price range is being studied, in this case weekly. Notice that stochastics have slowly been moving up, away from the oversold level of 20% and toward the overbought level of 80%. This indicates that bullish momentum continues to strengthen, meaning the most likely breakout would be to the upside.

How far the contract could run is another possible question. Initial selling interest could be found near the 4-week high of $10.13 (the same high mentioned earlier), and if that gives way a possible full retracement back to the peak of $10.54 1/4. The market's long-term monthly chart shows a major target near $10.67 1/4, a price that marks the 23.6% retracement level of the previous long-term downtrend from $17.89 (September 2012) through the low of $9.44 1/4 (November 2015). For more long-term analysis, see the Technically Speaking blog post from Tuesday, November 1. 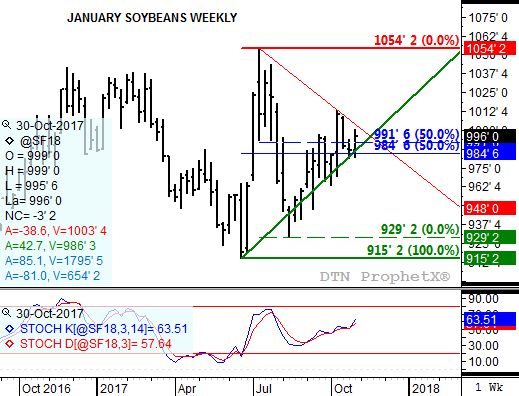 DARIN NEWSOM
11/3/2017 | 1:32 PM CDT
Update: January soybeans closed Friday at $9.86 3/4, barely holding above support at the Gann line for the week. This increases the likelihood of a breakout, possibly bearish, next week.