Live Cattle: The October contract closed $0.425 higher at $107.75. Weekly stochastics posted a bullish crossover below the oversold level of 20% last week, signaling the contract's secondary (intermediate-term) uptrend has turned up. Confirmation of this would be a new 4-week high by the October contract above $109.750.

Feeder Cattle: The October contract closed $2.225 higher at $150.65 October feeders could be considered in a secondary (intermediate-term) uptrend after posting a new 4-week high of $150.85 last week. Next resistance on the contract's weekly chart is at the previous high of $159.825 while major (long-term) resistance on the market's monthly chart is near $165.725. The major trend remains up.

Lean Hogs: The October contract closed $1.175 lower at $60.9755 last week. The market remains in a secondary (intermediate-term) downtrend. After spiking below support near $60.875, a price marking the 76.4% retracement level of the previous uptrend from $57.35 through the high of $72.25, October hogs were able to close back above this level. Weekly stochastics were slightly below the oversold level of 20%, indicating the contract could still challenge last week's low of $58.25.

Soybean meal: The more active December contract closed $6.20 higher at $311.40. The contract established a secondary (intermediate-term) uptrend last week as a new 4-week high was part of a bullish outside range. 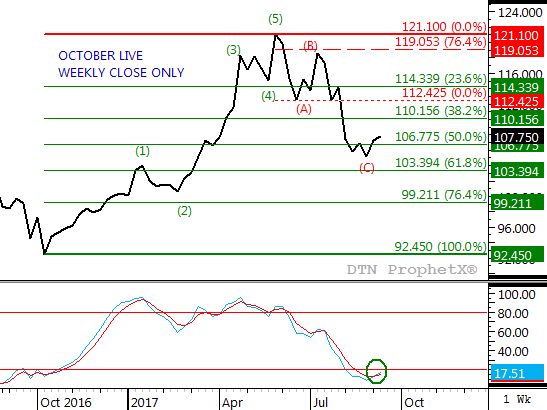