HRW Wheat (New-crop Futures): The Kansas City July 2018 contract closed at $4.87, up 4 cents for the week. Similar to the other winter wheat markets new-crop Kansas City wheat's secondary (intermediate-term) trend remains down. However, last week's spike reversal could be indicating Wave B (retracement wave) is beginning with resistance expected between $5.07 and $5.29 1/4.

HRS Wheat (New-Crop Futures): The Minneapolis September 2018 contract closed at $6.25, down 6 1/2 cents for the week. New-crop Minneapolis spring wheat remains in a secondary (intermediate-term) downtrend, though consolidating in what looks to be a bearish pennant formation. If so then downtrend may have reached its midpoint. Support is at the 4-week low of $6.20. 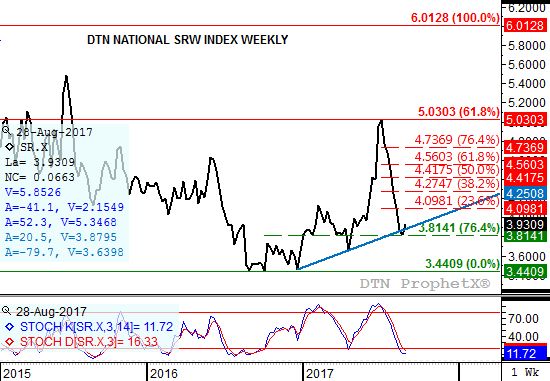