Feeder Cattle: The August contract closed at $147.925, down $4.65 on the monthly chart. Despite the lower monthly close the market remains in major (long-term) 5-wave uptrend. The market's secondary (intermediate-term) downtrend looks to be Wave 4 with support at $133.30 expected to hold. The Wave 1 high was $131.75. Monthly stochastics remain bullish, still well below the overbought level of 80%.

Corn (Cash): The DTN National Corn Index (NCI.X, national average cash price) closed at $3.34 3/4, down 1/2 cent for the month. The major (long-term) trend of the NCI.X remains difficult to classify. The best description could be a long-term sideways trend between the low of $2.81 1/2 (October 2014) and $4.10, a price that marks the 23.6% retracement level of the previous downtrend from $8.26 1/4 (August 2012). The NCI.X posted an outside monthly (above the previous month's high, below the previous month's low) below closing fractionally lower for the month. This is a bearish sign that would indicate a possible test of major (long-term) support. However, the NCI.X did post a new 4-month high of $3.48 indicating a test of resistance should be the next move. Continue to watch the cash corn market closely.

Soybean meal: The more active December contract closed at $311.20, down $13.10 on the continuous monthly chart. Soybean meal's major (long-term) chart remains a difficult read. The last major signal by stochastics was a bullish crossover below the oversold level of 20% at the end of March 2016, signaling the beginning of an uptrend. The sell-off from the June 2016 high of $432.50 through this past month's low of $292.00 amounted to a 76.4% retracement back to $299.90, with the more active December contract closing back above this support level. Given these indicators, the major trend could still be classified as up. The market needs to be closely watched. 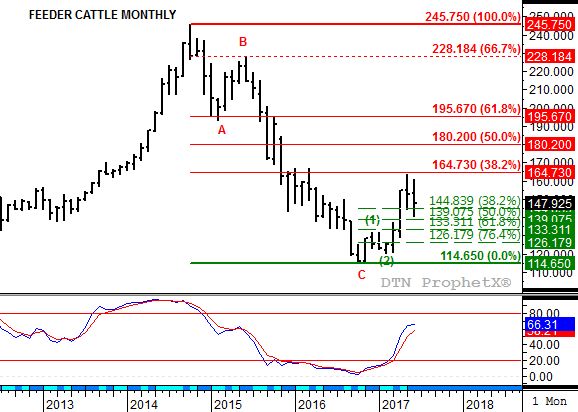