Brent Crude Oil: The spot-month contract closed $2.20 lower at $49.95. The market's minor (short-term) trend remains down with the spot-month contract testing minor support between $49.71 and $48.54 last week. These prices mark the 61.8% and 76.4% retracement levels of the previous minor uptrend from $46.64 through the high of $54.67. Daily stochastics are approaching the oversold level of 20% meaning Wave C (third wave) of a 3-wave minor downtrend could be nearing its end.

Crude Oil: The spot-month contract closed $2.14 lower at $47.66. The market is in Wave C (third wave) of a minor (short-term) 3-wave downtrend. With daily stochastics still bearish above the oversold level of 20% the spot-month contract could retest support at $46.91 to establish its Wave C low. This price marks the 61.8% retracement level of the previous minor uptrend from $43.76 through the high of $52.00.

Gasoline: The spot-month RBOB gasoline contract closed 6.55cts lower at $1.5771. The market's secondary (intermediate-term) trend remains sideways on its weekly chart while its minor (short-term) trend is down. Daily stochastics established a bearish crossover above the overbought level of 80% at the close of Thursday, May 25 and remain bearish well above the oversold level of 20%. Next minor support is between $1.5625 and $1.5359, prices that marks the 50% and 61.8% retracement levels of the previous uptrend from $1.4500 through the high of $1.6750.

Ethanol: The spot-month contract closed 3.4cts higher at $1.554. The market's minor (short-term) uptrend looks to be nearing its end as thee nearby futures contract tests resistance at $1.561 while daily stochastics climbed above the overbought level of 80% setting the stage for a minor bearish crossover. This price marks the 50% retracement level of the previous downtrend from $1.692 through the low of $1.43. The market's secondary (intermediate-term) trend remains sideways. 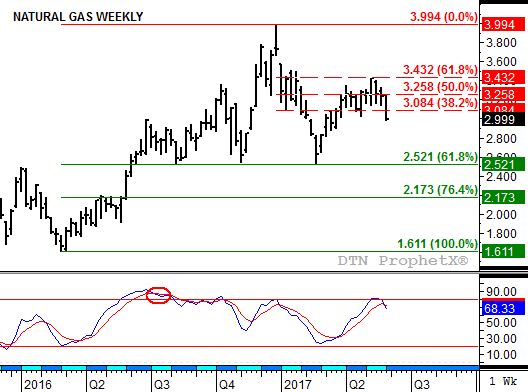