Corn (Cash): The DTN National Corn Index (NCI.X, national average cash price) closed at $3.27, up 4 cents for the week. The NCI.X continues to show a rare expanding triangle top on its weekly close chart. Last week's rally looks to be the beginning of an expected 50% retracement of the previous sell-off from $3.38 1/2 through $3.22 3/4. This puts the target (again, weekly close only) at $3.30 1/2. Weekly stochastics remain bearish below the overbought level of 80%.

Soybeans (Cash): The DTN National Soybean Index (NSI.X, national average cash price) closed at $9.21 3/4, down 5 cents for the week. Technically it could still be argued that the secondary (intermediate-term) trend remains sideways despite the continued slide by the NSI.X. However, last week's close equaled the previous mark set the week of December 19. Weekly stochastics are nearing the oversold level of 20%.

Soybeans (Old-crop Futures): The May contract closed at $10.00, down 6 1/2 cents for the week. May soybeans continue to indicate a likely secondary (intermediate-term) downtrend. However the contract has held its test of support at $9.87 1/2, a price that marks the 67% retracement level of the previous uptrend from $9.37 1/4 through the high of $10.88 1/4. Weekly stochastics are nearing the oversold level of 20% but are not in position yet for a bullish crossover. On the other hand, the contract's minor (short-term) trend did turn up with the rally seen late last week.

Soybeans (New-crop Futures): The November 2017 contract closed at $9.93 1/2, down 6 1/4 cents for the week. The secondary (intermediate-term) trend remains down with the last signal by weekly stochastics a bearish crossover above the overbought level of 80% (week of November 28, 2016). Initial support remains at $9.81, the 33% retracement level of the previous uptrend from $8.57 through the high of $10.43. However, given the contract is in a 3-wave downtrend it could look to test the 50% retracement level of $9.50. 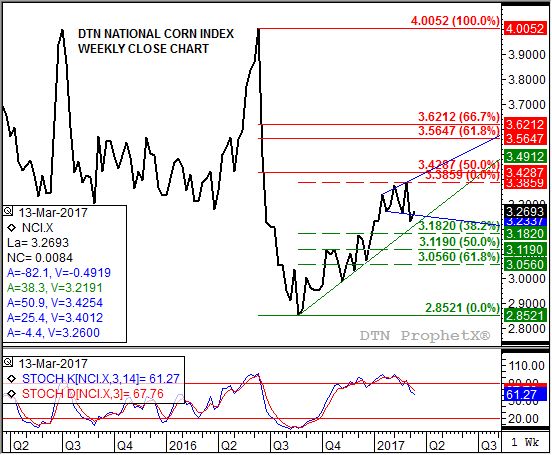