Gasoline: Chicago cash gasoline closed 8.80cts lower at $1.4451. This analysis has shifted to the cash market due to skewed charts following the expiration of the March and roll to the May as spot-futures with a 20-cent contango. Cash RBOB remains in a secondary (intermediate-term) consolation pattern between roughly $1.7625 and $1.3271, prices that mark the 23.6% and 50% retracement levels of the previous uptrend from $0.5025 through the high of $2.1517.

Ethanol: The spot-month contract closed 4.3cts higher at $1.520. The secondary (intermediate-term) remains sideways. Resistance is at the recent high of $1.612 while support is at the recent low of $1.425.

Natural Gas: The spot-month contract closed 18.1cts higher at $3.008. Despite the higher weekly close the secondary (intermediate-term) trend remains down. The recent minor (short-term) uptrend looks to be Wave B (second wave) of a 3-wave downtrend, with the spot-month contract testing resistance on the weekly chart at $3.084 and its daily chart at $3.012. Daily stochastics have moved above the overbought level of 80%, indicating Wave B could soon give way to Wave C.

Propane (Conway cash price): Conway propane closed 3.62cts higher at $0.5875. Despite the higher close the secondary (intermediate-term) trend remains down. However, cash propane continues to hold above support at $0.5281, a price that marks the 67% retracement level of the previous uptrend from $0.3775 through the high $0.9100. The market is in position to post a minor (short-term) uptrend, amounting to Wave B (second wave) of a 3-wave downtrend. Initial minor resistance is pegged at $0.6632, the 33% retracement level of Wave A. 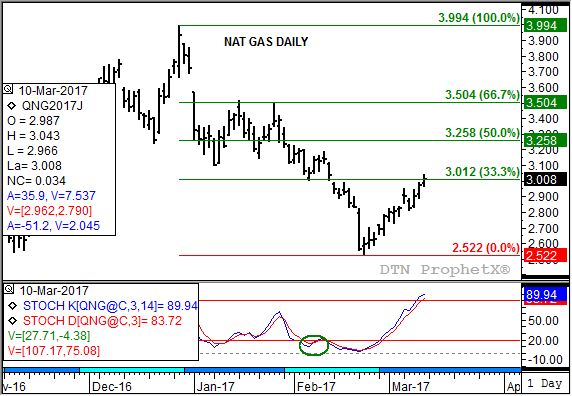