Brent Crude Oil: The spot-month contract closed $0.09 lower at $55.90. The market remains in a secondary (intermediate-term) sideways trend between the high of $58.37 (week of January 3) and low of $53.58 (week of January 9). Weekly stochastics remain bearish above the overbought level of 80%, indicating the next move should be toward the downside. Monthly stochastics are also well above the overbought level of 80%.

Gasoline: Chicago cash gasoline closed 1.83cts higher at $1.5331. This analysis has shifted to the cash market due to skewed charts following the expiration of the March and roll to the May as spot-futures with a 20-cent contango. Cash RBOB remains in a secondary (intermediate-term) consolation pattern between roughly $1.7625 and $1.3271, prices that mark the 23.6% and 50% retracement levels of the previous uptrend from $0.5025 through the high of $2.1517.

Ethanol: The spot-month contract closed 1.0ct higher at $1.514. The secondary (intermediate-term) remains sideways. Resistance is at the 4-week high of $1.612 while support is at the recent low of $1.425.

Propane (Conway cash price): Conway propane closed 2.62cts lower at $0.5513. The secondary (intermediate-term) trend remains down with next support pegged at $0.5281. This price marks the 67% retracement level of the previous uptrend from $0.3775 through the high $0.9100. Below that support is at the 76.4% retracement level of $0.4726. Weekly stochastics remain bearish above the oversold level of 20% indicating the market has room to continue its sell-off. 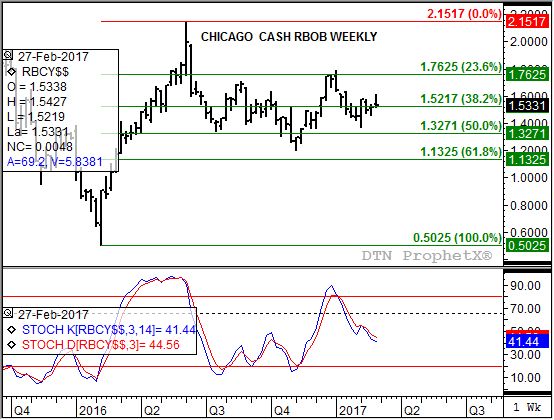