Corn (Cash): The DTN National Corn Index (NCI.X, national average cash price) closed at $3.37 1/2, up 8 cents for the week. Cash corn looks to have reestablished its secondary (intermediate-term) uptrend with recent downtrend signals trumped by the market's major (long-term) uptrend. This has the NCI.X in position to test next resistance on its weekly close only chart at $3.42 3/4, a price that marks the 50% retracement level of the previous downtrend from $4.00 1/2 through the low of $2.85 1/4.

Soybeans (Cash): The DTN National Soybean Index (NSI.X, national average cash price) closed at $9.83 1/4, up 32 cents for the week. A bullish crossover below the overbought level of 80% by weekly stochastics imply that the market has resumed its secondary (intermediate-term) uptrend. If so, next resistance is near $10.01 1/4 on its weekly close only chart. The previous high weekly close was $9.91 (week of January 17).

Soybeans (Old-crop Futures): The March contract closed at $10.59, up 32 cents for the week. It could be argued that the secondary (intermediate-term) trend has turned up again on the contract's weekly chart. Weekly stochastics posted a bullish crossover below the overbought level of 80%, indicating the contract could gain bullish momentum. If so, resistance remains between $10.69 3/4 and $10.89, prices that mark the 67% and 76.4% retracement levels of the previous downtrend from $11.35 1/2 through the low of $9.38. 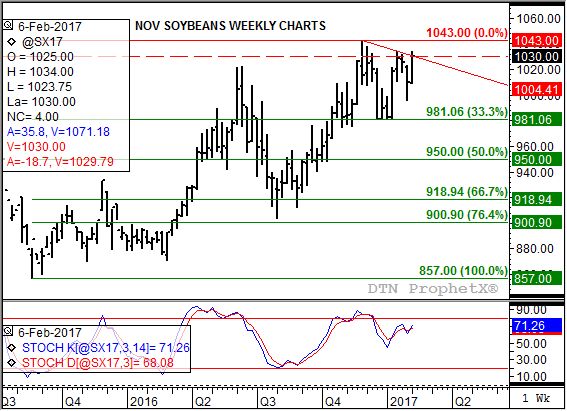