Tuesday, January 3 is the first trading day of the new year, and the U.S. dollar index (USDX) is wasting no time extending the major (long-term) trend on its monthly chart. By mid-month the USDX had moved beyond the 2016 high of 103.65, also known as the December high, hitting 103.82 without breaking a sweat. The USDX remains at its highest level since December 2002, though within a hairsbreadth of notching one more month on its gun belt back to November 2002 (monthly low of 104.12).

As discussed in this space back on December 16 ("Hiking a Less Traveled Path"), the long-term target for the USDX remains near 109.00. Note that this would be a test of the 76.4% retracement level of the previous major downtrend from 121.02 (July 2001) through the low of 70.698 (March 2008). And as discussed in the previous blog post, such a strong rally would seem bearish for dollar-backed commodities including metals, energies, grains, and livestock. 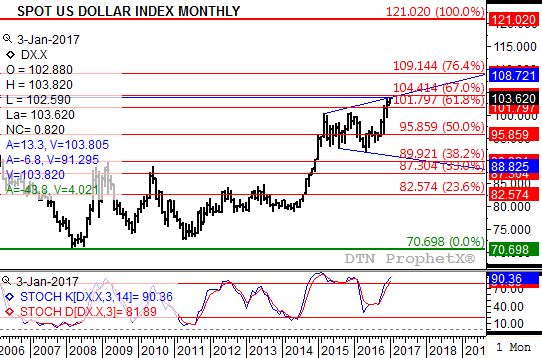