The U.S. dollar index (USDX) has strapped on its backpack and started the ascent of the final leg of the major (long-term) uptrend on its monthly close chart. All due to the fresh canister of oxygen it was given when the U.S. Federal Reserve raised interest rates this past Wednesday, and left the door open for a number of additional increases during 2017.

The immediate reaction by the USDX was to jump and run to a high of 103.56 (not visible on this close only chart) before slowing its climb slightly. Still, the index has reached its highest level since December 2002 when it was actually freefalling down the mountain from a high near 120.00 (July 2001) to the valley down below 72.00 (March 2008). Since that Wile E. Coyote-esque plume of dust, the USDX has been resilient in moving from base camp to base camp, the latest being a consolidation phase at the altitude between roughly 100.00 and 93.00, where it stayed from January 2015 through October 2016. Once November got rolling, so did the USDX. And now it seems little is left to slow its climb.

Just how far might it decide to go? For now it seems unlikely it will have the stamina to make it all the way back to the 120.00 peak, but the last decade has shown us it's best not to underestimate its strength. Given the consolidation range of roughly 7.00, and adding this range to the breakout point just beyond 100.00, sets the target near 107.00. But why stop there when the next actual peak is only slightly higher at 108.80?

If this goal, just below 109.00, is achieved we should recall where some U.S. dollar backed commodities were priced the last time we were here: Spot-gold was priced near $325 per ounce (currently sitting near $1,140), spot-crude oil (WTI) was $25 per barrel (now near $52), and cash corn (the DTN National Corn Index, or national average cash price) was all of $1.95 per bushel (calculated this past Thursday near $3.16).

This isn't to say that's where these kings of commodities are headed if the USDX does indeed reach its target, but what's to stop them? Supply and demand issues? Hardly, for at least crude oil and corn are both buried by oversupplies and showing no signs, yes I know about the production reduction "agreement" with OPEC and non-OPEC countries, of solving these issues at this time. 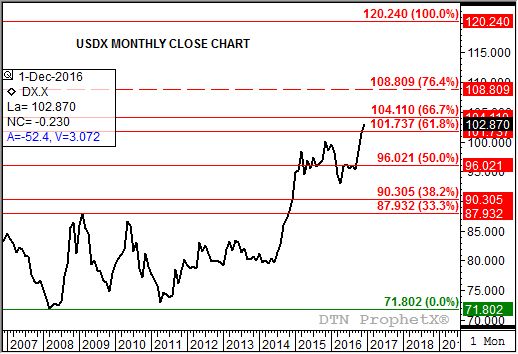