Live Cattle: The February contract closed $2.55 higher at $108.85. The minor (short-term) uptrend looks to have come to an end with last Friday's high of $109.225. Friday's close was equal to its open, creating a doji pattern on the contract's daily chart. This pattern indicates indecision, and with daily stochastics above 90% and in position for a bearish crossover, implying the minor trend is set to turn down.

Feeder Cattle: The January contract closed $3.95 higher at $124.975. While the secondary (intermediate-term) trend remains up, the minor (short-term) looks to have turned down Friday. The slightly higher close resulted in a bearish crossover by daily stochastics above the overbought level of 80%. The minor downtrend could result in a test of support at $121.25 and $118.60, prices that mark the 33% and 50% retracement levels of the previous short-term uptrend from $110.65 through last Thursday's high of $126.525.

Lean hogs: The February contract closed $0.175 higher at $54.175 last week. Wave 1 of the contract's secondary (intermediate-term) 5-wave uptrend looks to have come to an end after a test of resistance at $55.05 resulted in a doji (candlestick pattern showing indecision) on its weekly chart. The contract's minor (short-term) trend looks to be down as it finishes off a head-and-shoulders formation on its daily chart. The short-term downtrend would be Wave 2, a wave that often sees nearly a full retracement of Wave 1. In this case the initial move was from $47.525 through the recent high of $55.725. The contract has a previous price gap between $49.225 (high from October 21) and $49.35 (low from October 24).

Soybean meal: The January contract closed $2.40 higher at $312.60. The secondary (intermediate-term) trend remains up. With the contract holding above minor (short-term) support at $306.90, resistance is at the recent high of $329.80. 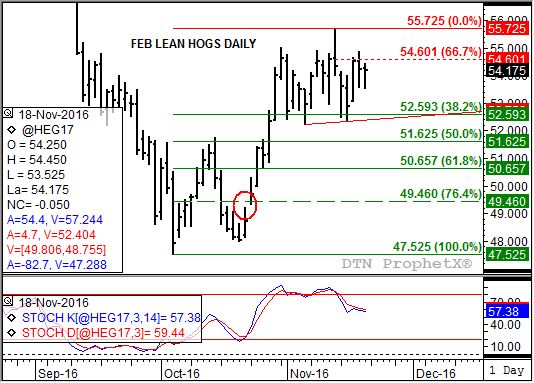