Live Cattle: The October contract closed $2.80 higher at $104.40. Technically the secondary (intermediate-term) trend remains down. However, last week's move to a new low of $99.375 followed by a rally to a higher close could be indicating a bullish spike reversal. Support is now at last week's low with initial resistance at the 4-week high of $115.425.

Feeder Cattle: The October contract closed $0.80 lower at $131.275. The October contract posted another new major (long-term) low $126.975 last week. However, the contract was also able to erase most of last week's sell-off by Friday's close. While this could be a possible bullish spike reversal, technical signals continue to indicate the secondary (intermediate-term) trend is down.

Lean hogs: The October contract closed $1.525 lower at $59.225 last week. The secondary (intermediate-term) trend is sideways with support at the contract low of $57.575. Weekly stochastics remain below the oversold level of 20%, in position to establish a confirming bullish crossover in the coming weeks. The initial bullish crossover occurred the week of August 15. 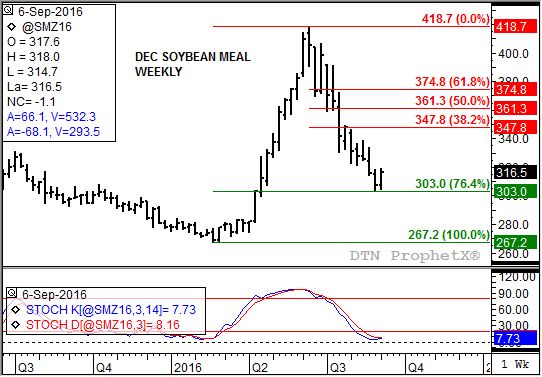