Live Cattle: The October contract closed $4.75 lower at $101.60. The move to a new major (long-term) low of $101.375 keeps the market in a secondary (intermediate-term) downtrend as well. Market volatility remains high at 19.5%, leading to continued noncommercial long-liquidation. Friday's CFTC Commitments of Traders report showed this group reducing their net-long futures position by 12,928 contracts, though still held a net-long of 20,069 contracts. This could lead to continued pressure over the coming weeks.

Feeder Cattle: The October contract closed $3.875 lower at $132.075. The move to a new major low keeps the secondary (intermediate-term) trend down. Weekly stochastics remain above the oversold level of 20% meaning the market has more room to work lower. Major (long-term) support is near $123.30.

Lean hogs: The October contract closed $0.575 lower at $60.75 last week. The market remains a mix of signals. The move to a new 4-week high $63.85 and weekly stochastics would indicate the secondary (intermediate-term) uptrend that began the week of August 15 remains in place. However, the lower close and high volatility could lead to another round of noncommercial long-liquidation next week. Friday's CFTC Commitments of Traders report showed this group reducing their net-long futures position by 3,977 contracts.*

Corn (Cash): The DTN National Corn Index (NCI.X, national average cash price) closed at $2.87 3/4, up 2 1/2 cents for the week. The NCI.X posted a spike reversal last week, falling to a new major (long-term) low of $2.73 before rallying to a higher weekly close. This move also established a bullish crossover by weekly stochastics, confirming the move to a secondary (intermediate-term) uptrend. The initial upside target is near $3.03, a price that marks the 23.6% retracement level of the previous downtrend from $4.00 1/2 through last week's low.

Soybean meal: The December contract closed $8.10 lower at $307.40. The secondary (intermediate-term) downtrend remains in place with the market testing support at $303.00. This price marks the 76.4% retracement level of the previous uptrend from $267.20 through the high of $418.70. Weekly stochastics are in single digits, indicating a sharply oversold market, and setting the stage for a turn to a secondary uptrend over the weeks ahead.

*The weekly Commitments of Traders report showed positions held as of Tuesday, August 30. 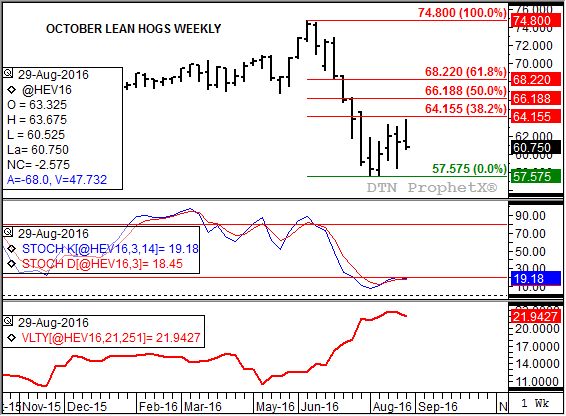