Soybeans (Futures): The more active November contract closed at $10.03, down $1.50 1/4 on the monthly chart. While the market remains in a major (long-term) 5-Wave uptrend the secondary (intermediate-term) trend of the November futures contract is down. Secondary support is pegged at $9.62 while major support is at $9.65 1/2. However, Wave 2 could extend down to at least $9.30 in the coming weeks.

Soybean oil: The more active September contract closed at 30.85, down 1.22 on the monthly chart. The market remains in a major (long-term) 5-Wave uptrend while the secondary (intermediate-term) trend is down, Wave 2 of the long-term pattern. The weekly chart shows September bean oil to be oversold, indicating this secondary downtrend could soon come to an end as it tests major support between 30.55 and 28.94 on the monthly chart.

Malaysian Palm Oil (Futures): The October contract closed at 2,316 ringgits, down 37 ringgits on the monthly chart. The major (long-term) trend remains down after a bearish crossover by monthly stochastic at the end of April 2016. The more active October contract was able to rally off July's test of support at 2,173, a price that marks the 67% retracement level of the previous uptrend from 1,863 (August 2015 low) through 2,793 (March 2016 high). 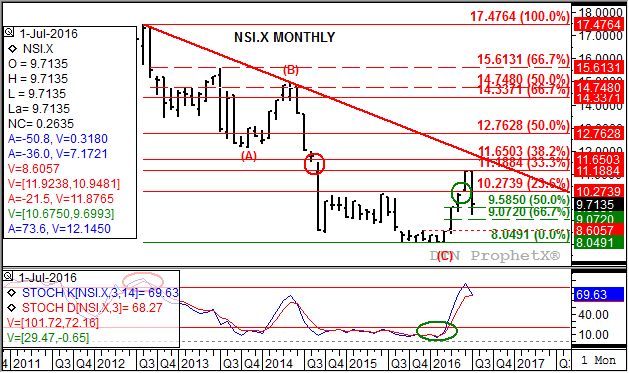