The new-crop November soybean/December corn (SX/CZ) spread has received a great deal of interest of late. In fact, DTN Contributing Analyst Joel Karlin posted a Fundamentally Speaking blog on the spread ("Long-term Nov Bean/Dec Corn Ratio") that evaluated how much stronger the beans could grow in relation to corn based on standard deviations from the norm.

I want to bookend Joel's blog with a look at the same spread on its weekly close chart. Note that after posting a low week close of 2.11 (week of September 8, 2015) SX/CZ skyrocketed to a high weekly close of 2.66 (week of May 2). This move was so strong it fought off a number of bearish crossovers by weekly stochastics during the uptrend. However, last week saw the spread weaken slightly, establishing another bearish crossover above the sharply overbought level of 90%.

From a technical point of view, this normally indicates the secondary (intermediate-term) trend is turning down. If so, the initial target becomes 2.48, the 33% retracement level of the previously mentioned uptrend. Notice that this is near the minor (short-term) dip down that bottomed out with a weekly close of 2.48 (the week of April 4). Beyond that, the 50% retracement level is down at 2.39 then the 61.8% retracement level of 2.32. 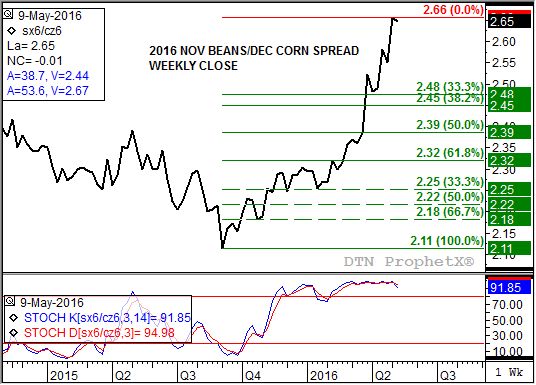