Corn (Futures): The July contract closed at $3.91 3/4, up 40 1/4 cents on the monthly chart. The market resumed its major (long-term) uptrend that dates back to October 2014 as the most active futures contract posted a bullish outside range during April (traded below the March low, above the Mach high, and closed higher for the month). Initial resistance remains at $4.43 1/2, a price that marks the 23.6% retracement level of the previous major downtrend from $8.49 (August 2012) through the October 2014 low of $3.18 1/4.

Soybeans (Futures): The July contract closed at $10.29 3/4, up $1.19 on the monthly chart. The major (long-term) trend is up with the July futures contract testing initial resistance near $10.67 1/4. This price marks the 23.6% retracement level of the previous downtrend from $17.89 (September 2012) through the low of $8.44 1/4 (November 2015). Monthly stochastics remain bullish, indicating support from both noncommercial and commercial buying could continue to be seen.

Wheat (Cash): The DTN National SRW Wheat Index (SR.X, national average cash price) closed at $4.39 1/4, up 6 1/2 cents for the month. The SR.X posted a bullish outside range in April (below the March low, above the March high, and closed higher for the month) establishing a major (long-term) uptrend. This confirms the bullish crossover by monthly stochastics seen at the end of March. 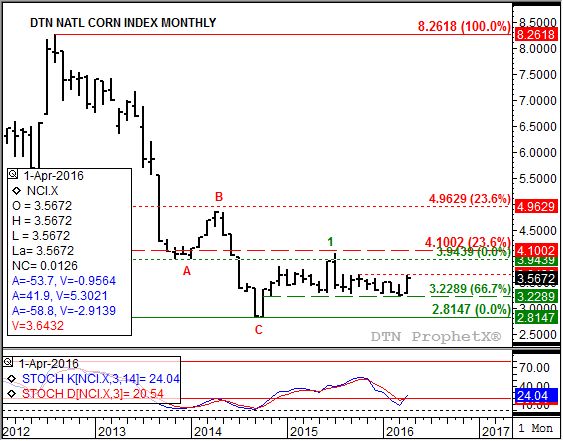