Live Cattle: The April contract closed $5.275 lower at $134.40. Given last week's bearish crossover above the oversold level of 20% by weekly stochastics, the secondary (intermediate-term) trend could now be viewed as sideway. The range is wide between the major (long-term) low of $123.05 and the high of $138.95 (week of December 28). Also, the contract left a bearish gap between the previous week's low of $133.20 and last week's high of $133.10. The minor (short-term) trend is down with the contract below support $129.40 indicating a test of the previous minor low of $127.15 is possible. The key to the market is exceptionally high market volatility (22.2% on the weekly chart) and the fact monthly stochastics have not yet established a bullish crossover below the oversold level of 20% indicating the major trend has clearly turned up.

Feeder Cattle: The March contract closed $3.80 lower at $150.025. March feeder cattle remain in a wide ranging secondary (intermediate-term) sideways trend between the recent high of $166.875 and the major low of $141.70. Weekly stochastics remain neutral above the oversold level of 20%. The minor (short-term) trend is also sideways.

Lean hogs: The April contract closed $0.075 higher at $70.375 last week. The secondary (intermediate-term) trend remains up, supported by continued noncommercial buying. Last Friday's weekly CFTC Commitments of Traders report* showed this group adding 4,658 contracts, pushing their net-long position to 15,952 contracts. April hogs are testing resistance between $69.55 and $71.05, prices that mark the 67% and 76.4% retracement levels of the previous downtrend. Weekly stochastics are above the overbought level of 80% setting the stage for a secondary change in trend soon. Decreasing market volatility could lead to more activity in option trades over the coming weeks.

Corn (Cash): The DTN National Corn Index (NCI.X, national average cash price) closed at $3.35 1/4, down 10 cents for the week. The market's minor (short-term) downtrend has the NCI.X testing support near $3.34 1/4, the 67% retracement level of its previous minor uptrend from $3.27 1/4 through the high of $3.48 1/2. Daily stochastics are well below the oversold level of 20% and could establish a bullish crossover in the near future. The secondary (intermediate-term) trend has turned sideways, as is the major (long-term) trend.

Soybean meal: The March contract closed $3.00 lower at $262.00. The secondary (intermediate-term) trend turned down again as the futures contract posted another major (long-term) low of $260.40. This had the market at its lowest level since July 2010. Daily, weekly, and monthly stochastics are all showing the market to be sharply oversold.

*The weekly Commitments of Traders report showed positions held as of Tuesday, February 9. 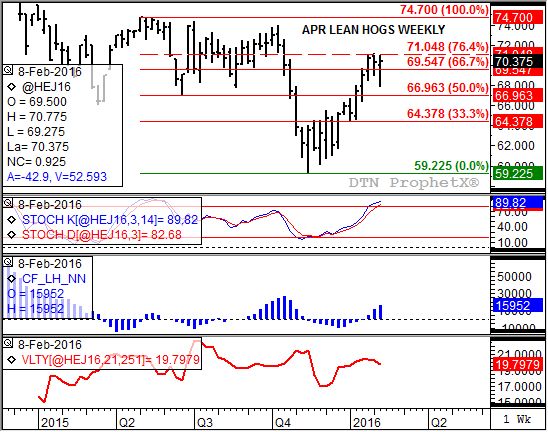