Live Cattle: The February contract closed $11.50 higher at $137.025. The market posted an explosive rally last week with the Feb contract leaving a bullish breakaway gap between its low of $128.975 and the previous week's high of $127.30. The secondary (intermediate-term) trend now looks to be up. However, the minor (short-term) has almost run its course with daily stochastics approaching the overbought level of 80% as the contract tests resistance near $137.60. This price marks the 67% retracement level of the previous minor downtrend from $145.425 through the low of $121.975.

Feeder Cattle: The March contract closed $12.175 higher at $160.125. The feeder cattle market is showing conflicting signals, last week strong rally leaving a bullish breakaway gap between the low of $152.275 and the previous week's high of $150.375. However, the bullish crossover posted by weekly stochastics was above the oversold level of 20%. Technically this keeps the secondary (intermediate-term) trend down with initial resistance near $165.30. On the other hand the minor (short-term) trend is up the contract's daily chart. March feeders are moving toward resistance near $162.65, the 50% retracement level of the previous minor downtrend from $183.575 through the low of $141.70, while daily stochastics near the overbought level of 80%.

Corn (Cash): The DTN National Corn Index (NCI.X, national average cash price) closed at $3.37, down 13 cents for the week. The secondary (intermediate-term) trend is sideways as the NCI.X tests initial support at $3.36. Below that is an area of support calculated between $3.29 and $3.23. Weekly stochastics remain neutral-to-bearish above the oversold level of 20%.

Soybean meal: The March contract closed $11.70 lower at $270.90. The secondary (intermediate-term) trend is sideways-to-down. Support is at the recent low of $268.30 posted the week of December 14. Weekly stochastics remain bearish below the oversold level of 20%. 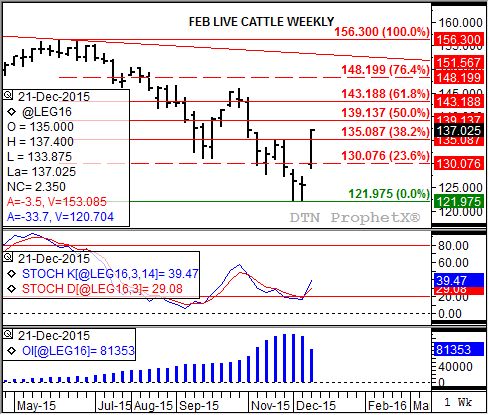