Conditions down in South America are about to turn much drier than they have been. Rains have increased across Argentina and have redeveloped across southern Brazil this week, but a strong cold front moving through will change those conditions going into November.

Argentina and Brazil have been enjoying some good rainfall during the last week after models were suggestive that it would be the start of a dry period earlier in October. Southern Brazil has been a bit drier, but after heavy rain fell in parts of Argentina this week it started to look up for planting conditions in both countries.

Corn planting is well off the normal pace in Argentina this year, about 15-20 percentage points behind usual. Though official numbers have not been released from Argentina as of this writing, it is hard to imagine much progress has been made with regard to soybeans either. In Brazil, recent wetness had caused more delays than the dryness farther south. The change for both countries this week has led to some better progress.

But changes are coming. A very strong push of very cold air is going to sweep through almost the entire continent for the last two days of October and into early November. This will push a cold front north from Argentina through most of Brazil Oct. 30 through Nov. 1.

The front should be very active as most pushes of extremely cold air are going through tropical air masses. Widespread precipitation should result from northern Argentina northward and could be heavy in spots. Severe weather may even occur in portions of both countries. Being such a push of cold air, the front may even move up close to the equator. That is quite a feat for any part of the world, but especially so as the Southern Hemisphere approaches summer.

Behind the front though, it is going to be very cold and dry. Temperatures are forecast to fall 10 to 15 degrees Celsius (18 to 27 degrees Fahrenheit) below normal for Paraguay and the southern half of Brazil for several days going into November. While well-below normal, any frosts are likely to be limited to far southern Argentina and the higher elevations of southern Brazil. The risk for frost damage is low, but not zero.

The greater threat is the dryness that is set to follow this front for both countries. The showers will clear out of central Brazil for several days. Eventually though, the tropics will win out and showers will return. That may come that following weekend, Nov. 6-7, or sometime that week, but they will return. Farther south, the front should bring about a pattern change that will likely last through most of November.

Models do not agree on this, however. The American GFS has showers returning to Argentina and southern Brazil the week of Nov. 7. It is at the end of that models run and is hard to trust at such a long timescale. Longer-range versions of that model do show some signs of a little bit of rainfall around that time frame, but still below normal. The European model does not go out that far on its normal operational run, but the longer-range version of that model shows something a bit similar. After that week though, the rest of November looks dry on both models.

In southern Brazil, the region has ample soil moisture to hold for a time, but not an entire month. If that week in the middle of the month does not bring decent rainfall, the conditions for first-crop corn and soybeans could see some weather challenges as that crop heads into pollination in late November and December. Eyes continue to be focused on these countries as world supplies of most agricultural products are at historically tight levels.

For a more extended look at South American weather, join me at the 2022 DTN Virtual Ag Summit Dec. 12-13. All of the information you expect from DTN, from the comfort of your home or office. For details on the agenda and how to register, visit www.dtn.com/agsummit

Previous Post (Argentina Corn Planting Slowest in Six Years)
Next Post (How Bearish Will Brazil's Next Soybean Crop Be?) 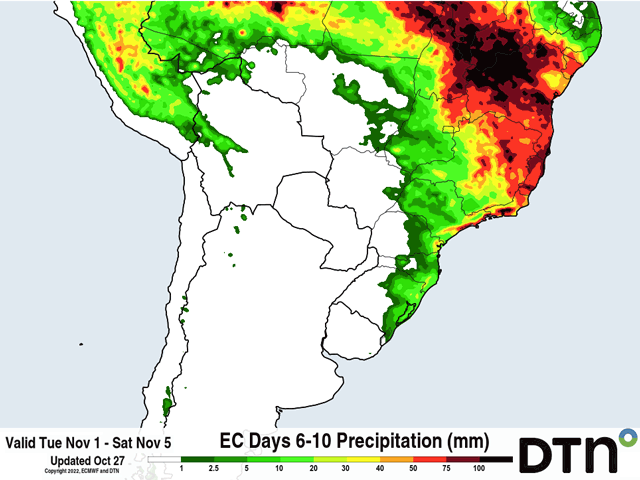