The weather over Argentina and southern Brazil is of increasing importance for the world-wide corn and soybean balance sheets. This has especially been the case in the states of Parana and Rio Grande do Sul in Brazil as a hefty chunk of their first-crop corn and soybeans are in reproductive and filling stages of growth.

The runup to December was already dry and crop conditions have trended downward in recent weeks. Poor rainfall of less than 50 millimeters (about 2 inches) over the last month have combined with daily high temperatures in the middle to upper 30s Celsius (90s Fahrenheit) and produced reports of stress.

Farther south in Argentina, there is a bit more time as only 66% of corn and 69% of soybeans have been planted and the earlier-planted crops have just started to enter pollination. This is slower than the normal pace, as producers that have a longer planting window are pushing their activities later in the hopes for better soil moisture and rainfall forecasts.

But for the next two weeks, when we can reasonably assume models are representative, prospects for good rainfall in these areas are not high. Almost complete dryness is forecast through Dec. 31 on both the European and American models. Meanwhile, temperatures will remain in the 30s Celsius (upper 80s to 90s Fahrenheit), with stress continuing to build. Models do suggest that a system will move through Argentina and southern Brazil around and slightly after the first of the year. But, in both cases, showers look to be sporadic and unorganized, giving only slim hope for widespread, meaningful rainfall. Most of the model simulations are posting less than 30 mm (1.2 inches) of rain during that period with some isolated areas seeing up to about 50 mm (about 2 inches). After that front passes through, longer-range models suggest dryness to resume.

Plants are known to do the best they can with what little they receive, but thoughts of good production out of southern Brazil's soybeans and first-crop corn are out the window. The dryness will set up second-crop corn with poor soil moisture if planted right away. Producers may elect to wait and see if prospects for better rain in late January and February turn out, which some models are suggesting.

Farther south in Argentina, the crop can wait. With only the earliest-planted crops getting into reproduction, there is time for rains to be beneficial. The showers that occur to start the new year will have some benefit and will be timely for some of the crop. If amounts can overachieve what models are suggesting, there may not be as large of a concern than fears currently favor. But reduced amounts would certainly heighten the risks for poor production out of the early-planted corn and soybeans. January still looks like a below-normal precipitation month and the increased rainfall in southern Brazil may not pan out for Argentina. But it should not be completely dry and February may turn out with just enough rain for later-planted crops to get by as they get into reproductive stages of growth.

There is a lot of time left in the season. And while the prospects for good production out of southern Brazil and Argentina are low for now, like I have said before -- timeliness of the showers may have more of an impact than the amounts. The next couple of weeks do not look good, but later January and February may provide good-enough conditions for late-planted crops in Argentina, and get second-season crops in southern Brazil into good-enough early development. It is just too early to tell.

The more interesting side of this equation to me, is will the better conditions in the northern half of the continent outweigh the poorer conditions in the southern half. Central and northern Brazil continue to have fantastic growing conditions and models do not see that changing through at least early February. That should allow first-crop corn and soybeans to finish with great production, while setting second-crop corn up for great germination and early growth. 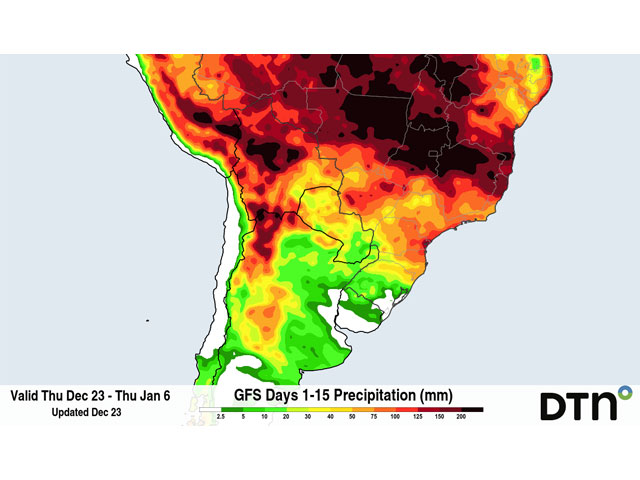