La Nina has made it hard to be a producer in Argentina so far this season. Very early this spring in September there were isolated showers around but not enough to fill soils enough for good planting and low temperatures produced plenty of frosts across central Argentina.

October has been far worse as the pattern really began to show its La Nina tendency. That is, for storm systems to go racing through the country with scattered showers, followed by stretches of dryness, sometimes up to a week without any appreciable rain. And when these systems move through, they can have holes in them where some areas get missed, leading to lower precipitation overall and sometimes drastically so.

Based on satellite imagery from Oct. 25, almost all of the country is seeing below-normal soil moisture. Some pockets of more normal to locally above-normal soil moisture is found across Buenos Aires and La Pampa. Estimates on moisture availability from the Climate Prediction Center point to limited moisture across the western half of the country, though it still seems adequate for eastern areas.

According to the government of Argentina, corn planting progress is equal to the pace last year at 36% complete. Last year had issues with dryness as that followed a La Nina pattern as well. Corn planting in Argentina is stretched out over the months of September through December as a longer growing season allows producers to spread out risk from any dry stretches in the country.

Those early-planted crops are really looking forward to more rainfall and a break from the La Nina pattern. And models are suggesting that a break is coming to Argentina and up through southern Brazil as well.

Isolated showers will start to develop Oct. 29 and steadily increase through the weekend, especially across those drier western areas. A system will form out of that activity early next week and slowly move across Argentina northeastward into southern Brazil. The slow-moving nature of the system is the most irregular part of this system. La Nina typically leads to stronger storms that move quicker, but this one will not. It has also been modeled to be more active with more widespread showers along the front, leading to widespread amounts over 25 millimeters (1 inch) and some localized amounts over 50 mm (2 inches). There will inevitably be some holes in the showers, but those look to be few.

The rest of Brazil continues to be in really good shape overall. There are some pockets of dryness where showers have not been as generous this spring. Those are mainly found in far western growing areas of the Mato Grosso and Mato Grosso do Sul and also scattered through Goias and Minas Gerais northeastward. But planting progress here has far surpassed progress the average pace for both full-season corn and soybeans. According to private estimates, total planting progress in Brazil has eclipsed 60% for corn and 38% for soybeans. That is 12% and 15% ahead of last year's pace, respectively.

In fact, at over 68% complete, soybean planting in the state of Mato Grosso is on the fastest pace in at least the last five years, and almost 44% ahead of last year's pace. With the wet season still in full swing, these early planted crops should be able to take advantage of likely beneficial conditions for the next several months and put second-season (safrinha) corn on a pace to be planted within the ideal planting window in January and February.

Rain here will be enhanced by the system moving northward next week and should be able to keep up with evapotranspiration, continue to build soil moisture in subsoils, and fill in the drier gaps mentioned above.

Overall, the pattern during the next week does look very good for nearly all of South America. But La Nina is not going away. Ocean temperatures in the central Pacific have been cooling significantly over the last several weeks and the drier La Nina pattern may reassert itself after this system moves through. Models are mixed on that prospect for the following week, but suggest that dryness concerns are not over once this system moves in. 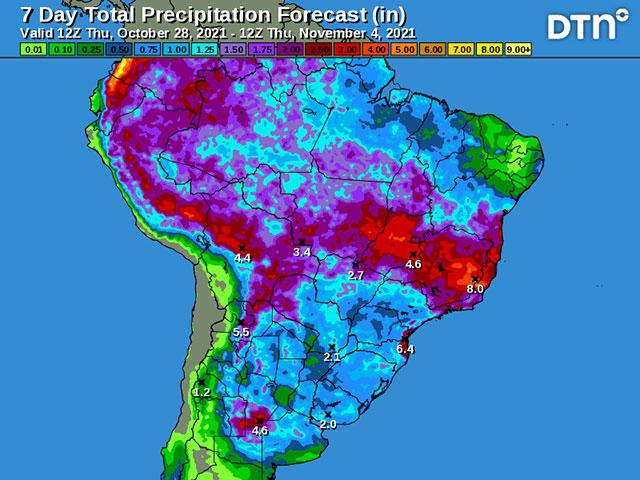