The 2017 crop weather outlook that I presented during last week's Commodity Classic farm show in San Antonio was well-attended. Thanks to everyone who took in the program. It turned out that the crowd had an international component, as a delegation of growers with the Brazil soybean producers association, Aprosoja, sat in on my talk as well. They had been made aware of the weather outlook program by Ricardo Arioli Silva, a Mato Grosso producer and active member of Aprosoja, who is also well-acquainted with DTN.

The Aprosoja group stayed around after my presentation, and we talked about -- what else? -- crop weather in Brazil. The primary weather-related topics were: How much recent very-heavy rain might have hurt the crop, and what is the impact of the season in total on soybean production. Here's a summary of what the Aprosoja producers told me.

First, regarding the heavy rain: There has indeed been some damage, and it occurred in a very high-producing area of Mato Grosso, which in turn is by far the leading soybean-producing state in Brazil. The heaviest rain fell in western Mato Grosso, including the districts of Campo Grande and Sapezal. The area that got hit the hardest with late-season rain, causing at the least extensive crop quality downgrading and at the worst flat-out production loss, produces about 30% of the total soybean crop in Mato Grosso. Mato Grosso, in turn, produces around 40% of the total Brazil soybean crop. Doing the math, applying 30% of the area to 40% of total production, we came up with an approximation of around 12% of the total Brazil soybean crop that was damaged by the recent heavy rain. When I mentioned this number to the group, everyone nodded in agreement that such an assessment was fair. One of the growers from Aprosoja, by the way, was from Sapezal and verified that the rain had caused some notable damage.

As far as crop size is concerned, the Aprosoja group's general thought was that production will indeed be large this year. Their views hovered around the 104- to 106-million-metric-ton range. Their thought is that the crop will be large -- a new record -- but that the effect of the late-February rain has likely taken some bushels off the total. Final crop size will of course be discussed every day for probably the next two months at least.

It's always enjoyable and useful to talk crop weather from different areas of the world. Thanks to Susan Acquistapace for taking the group photo. And, certainly, a big Thank You -- Obrigado -- to the Aprosoja delegation for attending my program and for the interesting discussion afterward. 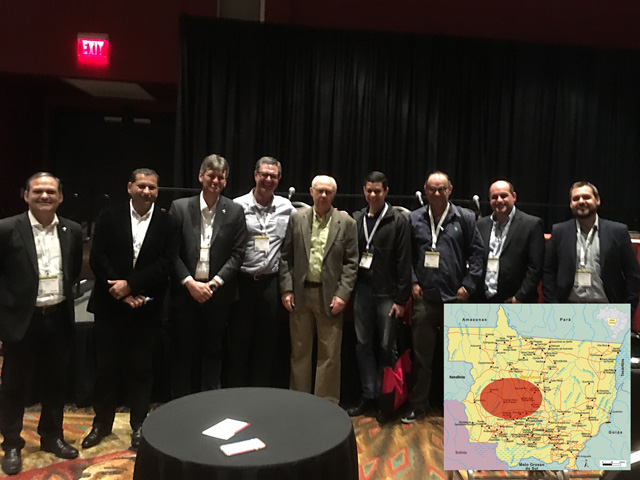