The late-February Pacific Ocean commentary from the Australian Bureau of Meteorology is highlighting an increasing likelihood of an El Nino in 2017. The Australians are now coming around to what we have been talking about since late January -- that rapid warming in the equatorial eastern Pacific Ocean would likely lead to an El Nino this year. This assessment has been given despite the fact that all of the thresholds needed to declare an official El Nino have not yet been met.

However, we feel that we are already seeing El Nino-signature weather events in both North and South America due to the very warm eastern Pacific waters. The strongest signatures have been: 1) The very wet weather in California; 2) The very warm weather experienced in the central U.S.; and 3) The wet conditions in late December through January in central Argentina.

In the U.S., this El Nino pattern should be very favorable for spring planting in the northwest Midwest and Northern Plains with near- to below-normal rainfall. Some planting disruptions are possible in the southern and eastern Midwest extending southward to the Gulf coast due to near- to above-normal rainfall. However, portions of the southern and eastern Midwest have recently been classified in Moderate Drought by the U.S. Drought Monitor; thus, precipitation would be beneficial for early-season crop moisture. 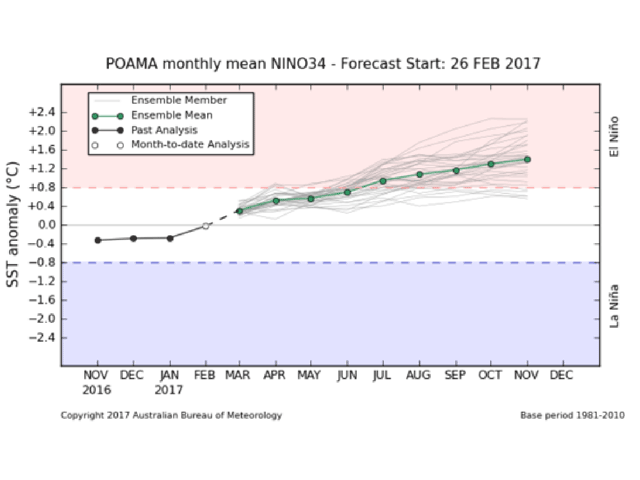