The end of December in South America equates to the end of June in North America. And, just as we see in the U.S., this point in the growing season is a nervous one for both farmers and grain traders if the weather pattern has hot temperatures and skimpy precipitation.

That's what we're seeing now in Brazil. The northern half of Brazil's crop areas -- Mato Grosso, Goias, Minas Gerais -- and the collection of states known as Mapitoba (Maranhao, Piaui, Tocantins and Bahia) are showing signs of dryness. To complicate that situation, the next week features above-normal temperatures and generally below-normal precipitation. This is not a favorable pattern for crops, and has got some concern working through the soybean market.

One reason why we are seeing as much concern as we are is that dryness in northeastern Brazil contributed to a drawdown in crop production this past year, 2016. Soybean production finished with under 100 million metric tons, after early projections called for around 103 million tons. And, the Brazil corn crop had a huge drawdown in its total, coming in more than 25% below the 2015 harvest. Those disappointing figures were due to dry conditions, and mostly in the northeastern sector. The trade is seeing the potential for a similar fate this year.

Will this drier trend slash Brazil's production? No -- however, perception is reality in the crop-guessing corner of the market world, and the prospect of even a few million metric tons less in soybean production from Brazil is enough to raise a cautionary flag about total supplies in the months before the 2017 U.S. harvest.

Longer-range forecasts suggest improved rainfall for at least Mato Grosso and Goias. However, it's still an open question as to whether the far northeast collection of states will be in line for enough rain to truly rebound from the midseason dry trend. 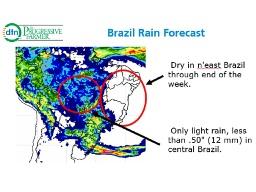 Bryce Anderson
1/3/2017 | 4:36 AM CST
Thanks for reading and commenting. Much appreciated.
YDe Geus545216110
12/31/2016 | 8:30 AM CST
We are in Alto Parnaíba, South of Maranhão State and definitely feeling the consequences of another drought of twenty days now. Other regions nearby, known for more rainfall are also in the same condition and as mentioned in the article, weather forecasts are not very favorable yet.